Desktop-Only Content: This information applies only to the Desktop version of Terraria.
Gemcorns

Gemcorns are a type of Seed whose saplings grow into Gem Trees. They can be crafted from an acorn and a gem. Gemcorns must be planted in the Underground layer or below on Stone, Moss, or any of their biome variants, and the 3 blocks on each side of the planted one must also be one of these. Chopping down a Gem Tree will yield 10-20 Stone Blocks, 0-5 Gemcorns of the tree’s type, and 0-5 Gems of the tree’s type (To be more precise, each tile of the tree has a 1/10 chance of dropping a gem (if it doesn't drop a gem, it'll always drop a stone block), and every leaf tile additionally has a 1/2 chance to drop another gemcorn[1].) 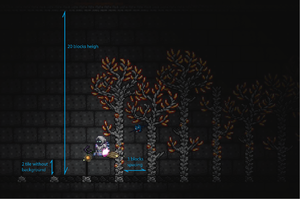 Functioning gemtree farm. The floor is completly stone, with non-painted blocks spaced by three black painted ones to mark optimal spacing and places without background. Almost all background is covered with walls, except for the 2 tiles where the gemtree sapling occupies once placed.

Farming gemtrees requires only an open space in the underground layer or below. Light levels do not affect the growth of Gemcorns at all. Natural Gem Trees can be found in the Underground layer and Cavern layer, although they are rare.

To reduce mob spawning in a Gemtree farm, it is possible to place background walls in almost all of the background, except the two spaces occupied by the placed Gemcorn (this trick is commonly used to make indoor tree farms). Some underground enemies (and critters) will still spawn, but far fewer than with an un-walled farm.

Gemcorns can grow in front of fences like other trees. They can also grow in front of natural dirt or other underground walls (such as mushroom, lava, dirt, stone, and the Underworld's background). Of course, natural walls will allow enemy spawning as usual.

The Gemcorns must be planted with three tiles of space from other saplings for both to be able to grow.

Gemcorn saplings need at least 11 blocks of "head room" above them, but 16 blocks is better, and 17 will avoid the topmost leaves clipping into the ceiling. The tree size is determined every time the sapling attempts to grow, and if there are fewer than 16 blocks the attempt will fail. Thus having less than 16 blocks available will effectively slow down growth, and will produce only shorter trees (which will yield fewer gems).