This article is a stub. You can help the Terraria Wiki by expanding it. 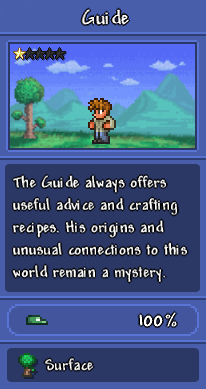 The Guide as depicted in the Bestiary's first entry.

The Bestiary is an in-game catalog of Terraria's various entities, including enemies, NPCs, critters, and bosses. It can be viewed by opening your inventory and clicking the book icon located to the right of your item trash can. The Bestiary displays a description and basic statistics for each entity, including health, damage, defense, and knockback, as well as advanced information like item drop rates. Entries can be sorted and filtered by various criteria, like stats, locations, times, events, etc.

Initially, no information is available about any particular entity. There are four stages of progression for each entity, each unlocked based on a player's current experience level with that entity:

Experience is tracked by various methods, depending on the entity type:

At the bottom of the Bestiary is a bar that fills as the Bestiary is completed, allowing players to track their progress. Bestiary progress is tied to a world, not a character. Unlocking 10% of the entities in the Bestiary makes the Zoologist NPC available, who sells progressively more items (eg. the Cat License) as the player completes more of the Bestiary. Unlocking all information for the entries is not a requirement for this, as long as the entries themselves have been unlocked.

Killing creatures spawned from Statues count in regard to the progression of the bestiary, making them useful for filling out information on rare creatures such as Medusa and Mimic.

From top-left to bottom-right in the Bestiary display. The "Number of Creatures" column may show double-counted creatures that appear in multiple biomes.