Desktop/Console-Only Content: This information applies only to the Desktop and Console versions of Terraria.
BetsyHardmode exclusive 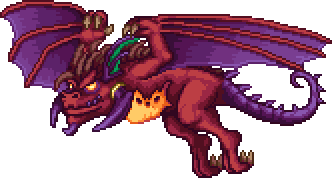 Betsy is a Hardmode, post-Golem boss that spawns in the last wave of the Old One's Army event, wave 7. She attacks by flying, charging, and spewing projectiles from above. Like all enemies in the Old One's Army, she will despawn upon completion or failure of the event.