Desktop/Console/Mobile-Only Content: This information applies only to the Desktop, Console, and Mobile versions of Terraria.
Brain Suckler 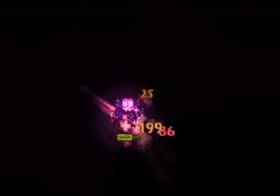 The effects of the Obstructed debuff.

The Brain Suckler is a Hardmode, post-Lunatic Cultist flying enemy spawned by the Nebula Pillar during the Lunar Events. It latches onto the player's head, dealing large amounts of damage at a steady rate, while also inflicting the Obstructed debuff for the remainder of time it is on the player. The debuff causes the player's screen to darken significantly, except for a small area around the player, similar to the Blackout debuff. It additionally has the effect of Bleeding, preventing all health regeneration.