From Terraria Wiki
< Brain of Cthulhu
Jump to: navigation, search
This page is part of the Vietnamese translation project.
Brain of CthulhuFirst Form 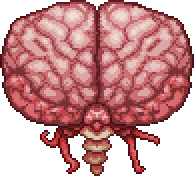 The Brain itself is initially invincible. It teleports around the player, drawing nearer before teleporting away again in a random direction while its

Creeper minions attack. The Creepers do not teleport along with the Brain but are instead pulled between the player and the Brain in large, sweeping orbits. Once all Creepers are defeated, the Brain enters its second phase. In Expert mode, Creepers can give the player certain debuffs.

In the second phase, the Brain becomes vulnerable to attacks and aggressively attempts to ram the player before teleporting away.

Also in the second phase, 3 mirror images of the Brain appear to distract the player and become more visible as the boss loses health. And just like the creepers in expert mode, the Brain can also cause various status effects such as Darkness, Silenced and Weak.