Desktop/Console/Mobile-Only Content: This information applies only to the Desktop, Console, and Mobile versions of Terraria.
Cell Phone

For an extensive guide to crafting this item, see Guide:Crafting a Cell Phone.

The Cell Phone is an informational item that displays fishing power, weather, moon phase, elevation, distance from the center of the world, time, nearest valuable environment item, movement speed, current DPS, total kills of the last enemy attacked, rare creatures nearby and total number of nearby enemies. It can also teleport the player home, similar to a Magic Mirror. The Cell Phone has one of the most complex crafting trees in Terraria, using 13 base items (and 7 crafting operations), beaten by the Zenith, which uses 14, and followed by the Ankh Shield, which uses 11.

Unlike most other informational items (i.e. its constituent parts), the Cell Phone does not double as an accessory, and cannot be equipped in accessory slots. It instead functions solely from the player's ordinary inventory slots, which puts it into the tool category.

While the inventory screen is open, Cell Phone information is hidden. Instead, an icon is displayed for each information type, each of which can be clicked to toggle their display on or off.

In multiplayer, information from the Cell Phone will be shared with other nearby players on the same team. 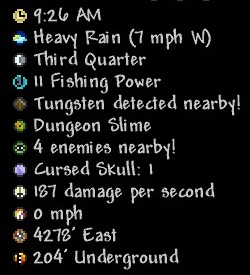