From Terraria Wiki
(Redirected from Chasm)
Jump to: navigation, search

Chasms are deep tunnels found in The Corruption or The Crimson. They generally begin at surface openings, and are lined with a thick layer of Ebonstone/Crimstone, respectively. They tend to reach depths around where the Cavern layers begin. Large clusters of Corruption/Crimson enemies tend to spawn and collect in these cavities. 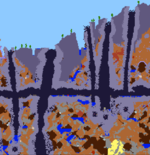 A Chasm in the Corruption is a long vertical pit beginning at the surface, dropping straight down into a dark abyss. The walls are made of Ebonstone, with Ebonstone Wall backgrounds. An intersecting horizontal tunnel generally connects Chasms near their bottoms, and contains several Demon Altars. Shadow Orbs tend to appear below Chasm floors, buried some distance beneath. They are usually enclosed in Ebonstone, rendering them inaccessible without mid-tier tools or explosives, such as dynamite or bombs.

A Crimson Chasm is lined with Crimstone, and begins at a more slanted entrance, rather than a vertical pit. Crimson chasms are less linear, and can branch or zigzag. They tend to lead to large chambers that appear to have the shape of hands, and branch out into veins, each of which lead to Crimson Hearts (the Crimson version of Shadow Orbs); These are usually enclosed in Crimstone, rendering them inaccessible without mid-tier tools or some form of Explosives capable of destroying tiles. Crimson Altars (the Crimson equivalent of Demon Altars) can be found concentrated at a single layer on the descent into the chasm.