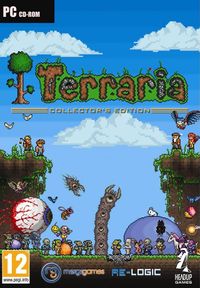 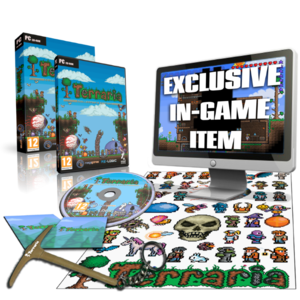 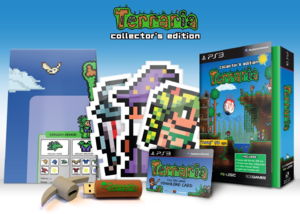 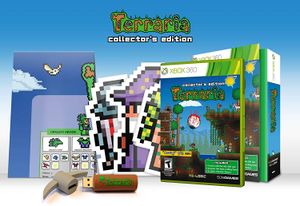 Terraria Collector's Edition is published by Headup Games, distributed by Merge Games or NBG Multimedia, and sold through Amazon. It is available for

editions include an exclusive item crafting poster, a pickaxe flash drive, 3 stickers and the actual game.

There is a total of 10 different trading cards that can come randomly with the Collector's Edition.

"Few mortals know I can speak their languages"
The most magical of creatures, said to be made up of the essence of Terraria itself. It's rare to see more of a Wyvern than a shadow amongst the clouds. Once kind, the corruption has made them agressive.

"Pain, suffering, loneliness, Ahghhhh"
It is said that those who are devourered [sic] by an Eater of Souls become a Wraith. These denizens of damnation wander alone through Terraria desperate to reclaim a soul.

"The sands of time are flowing. And well, you are not aging very gracefully..."
Servant to mother nature, the Dryad lives a life of solitude, prefering the company of Blinkroot and Daybloom to human contact.

"AAAaaawwwwwwooooooooo."
Once thought to be a myth, Werewolves appeared in the second age of Terraria. These elusive creatures spend most of their lives hidden, emerging only on full moons with a scent for blood.

"You pathetic fool. You cannot hope to face my master as you are now."
Many have heard his sobbing echo from the depths of the dungeon that towers over Terraria. It is said that as the sun sets his sobs turn to twisted cackles. Then silence.. Save for the scraping of skeletal fingers on stone.

"Squelch Squelch.."
Of all the species of Slime that inhabit Terraria, the Blue Slime is by far the most common. It's said that all Slimes originate from single source, destroying that source may rid the lands of dreaded ooze forever.

"They say there is a person who will tell you how to survive in this land... oh wait. That's me."
Little is known about The Guide's history. Some say he was the first to set foot on the lands of Terraria, some say he has always been there. His knowledge is unsurpassed, just remind him to lock the door.

"Gguurrgllee Gguurrgllee"
Common to corrupt lands in Terraria, the Eater of Souls is the bane of an unseasoned traveler wandering too far from home. It is named for its gruesome appetite for flesh and ghastly looks.

"Ratatatatatatat"
The Megashark™ is leading the market in shark based weaponry. With a rate of fire of 8 shots per second and 6 inch teeth. Buy today and become the ultimate predator.
Teeth length subject to shark supply, fins sold separately.

The game can be found online in the following Amazon marketplaces: