From Terraria Wiki
(Redirected from Crimson Altar)
Jump to: navigation, search
The content described on this page is only generated naturally and therefore cannot be collected.
Demon Altar

This article is about the crafting station. For the altar located in the Jungle Temple, see Lihzahrd Altar.

A world after smashing a large number of Crimson Altars leaving the Crimson and Hallow to spread.

Demon Altars and Crimson Altars are naturally-occurring crafting stations found mainly in and around chasms in The Corruption or The Crimson, and less frequently underground. They are used to craft pre-Hardmode boss-summoning items and the Night's Edge as well as the Void Bag and Vault. Altars emit some light, making them easy to spot. They cannot be freed, picked up, placed, or crafted.

After a world enters Hardmode, they can be destroyed with Hardmode-tier hammers, but attempting to hit them with a hammer before Hardmode, or with a hammer with less than 80% hammer power causes the player to lose half their health and will leave the altar unaffected.

After the Wall of Flesh has been defeated in a world, altars can be destroyed with anything that has a hammer power of at least 80% (typically the Pwnhammer). Each destroyed altar will spawn a Wraith and causes one type of Hardmode ore to appear in the world, with the appropriate status message displaying in the chat: "Your world has been blessed with <name of ore>!"

Players will be able to find these new ores scattered across the Underground layer to near-Underworld levels, with them replacing most blocks created during world generation. They will spawn at random locations in varying quantity, in places explored and unexplored alike. 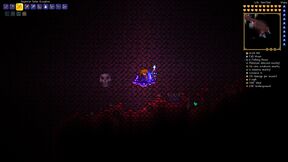 A Demon Altar that spawned in a Crimson world.