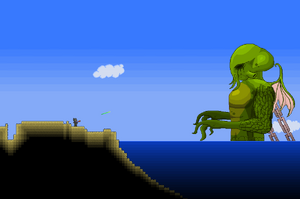 Cthulhu is a fictional cosmic entity originally devised by author H. P. Lovecraft, as an evil god from beyond the human universe. The creature remains a popular element of Lovecraftian horror today.

Cthulhu was a possible boss. Re-Logic was considering its addition at one point, but he was replaced by Moon Lord. While Cthulhu itself never made an appearance in Terraria, a number of enemies and items include direct and indirect references to Cthulhu.