From Terraria Wiki
(Redirected from Cultist)
Jump to: navigation, search

Desktop/Console/Mobile-Only Content: This information applies only to the Desktop, Console, and Mobile versions of Terraria.
Cultist ArcherHardmode exclusive

Master
Statistics
Sounds
Not to be confused with Lunatic Cultist.

The Cultists are Hardmode, post-Golem enemies that spawn along with a Mysterious Tablet at the entrance to the Dungeon after Golem has been defeated. Four Cultists will appear there: two Cultist Archers and two Lunatic Devotees. Defeating all four of the Cultists causes the Lunatic Cultist boss to spawn instantly at their location, destroying the Mysterious Tablet in the process. Defeating the Lunatic Cultist then initiates the Lunar Events.

All four Cultists respawn and reset their location and initial passive state after one in-game day, if the Lunatic Cultist was not summoned, if the player runs away or dies during the fight, when all four Celestial Towers are destroyed, or when the world is closed and restarted. Restarting the world can be the fastest option to reset them to their original state.

The Cultists having spawned with restricted space. 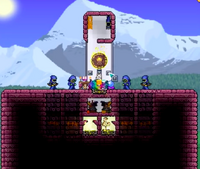 The Cultists having spawned with no roof and a path made of de-actuated blocks. 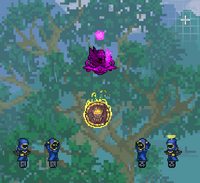 The Cultists having spawned only on individual blocks. Every single other dungeon brick in the world had been removed at this time, including those that had made up the entrance. There was a considerable gap of just air below them and to all sides. It should be noted that these were their precise original positions.