Desktop-Only Content: This information applies only to the Desktop version of Terraria.
Pylons
Statistics
Sounds

Two pylons being used, as shown in the changelog.

Pylons are furniture items that allow a player to teleport to any other pylon, by either selecting the pylon or by finding a pylon in the fullscreen map. 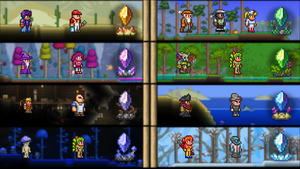 A suggestion of one kind of pairings that allow you to buy pylons.

Most pylons, with the exception of the Universal Pylon, appear in NPC inventories when the following conditions apply: 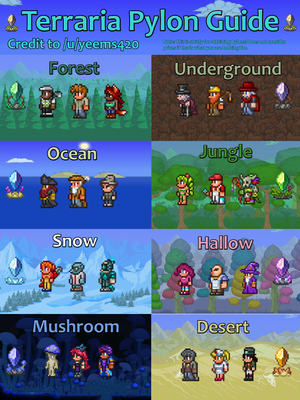 Another guide to groupings to allow pylon purchases

A hybrid biome can result in multiple pylons appearing in the NPC's inventory, except the Forest and Cavern, which are mutually exclusive and only available when not in the Snow, Desert, Ocean, Jungle, Hallow, or Glowing Mushroom biomes.