A player encountering a small deposit of Diamond. 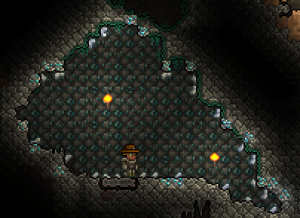 A diamond cave that contains 40 diamonds. The background wall is obtainable through crafting.

Diamond is a gem found within the Underground and Cavern layers of a world. They are obtained by breaking special blocks that have noticeable light blue gemstones embedded in it. They can also be extracted from Silt, Slush, or Desert Fossil by putting them in an Extractinator. Rarely, diamonds can be found in bulk in its own special gemstone cave, or in one that contains all of the other gems as well (besides Amber).

Like all other gems, Diamond can be placed on blocks. As of 1.4.0.1, they can be crafted back into their Stony block forms at a Heavy Work Bench in a graveyard and can be obtained by cutting down a diamond Gem Tree, dropping 0-5 of its respective gems.