Secret world seeds are world seeds which have been discovered as secret easter eggs that generate worlds with strange or unique features. Unlike regular world seeds, which affect only the usual world structure, secret seeds can produce worlds with characteristics that would not be attainable through normal world generation, i.e., they can affect the game's mechanics while playing in that world. For instance, they may change enemy statistics and behavior, item drops, graphics, theme music, and more.

Secret seeds use unique world-generating mechanics that differ from normal seeds. Using a secret seed overrides the normal use of seeds as a source of randomness, and two worlds created via the same secret seed will not necessarily be identical.

Map view of a world generated with seed 5162020. Note that there is both Corruption and Crimson.

This seed references the date of 1.4's official release, 05/16/2020, and invokes a highly extraordinary world generation referred to in the source code as drunkWorldGen.[1] It has therefore come to be referred to by the Terraria community as drunk world.

Not the bees[edit | edit source]

"Not the bees!" redirects here. For the "Not the Bees!" achievement, see Achievements.

Map view of a world generated with seed "Not the bees". 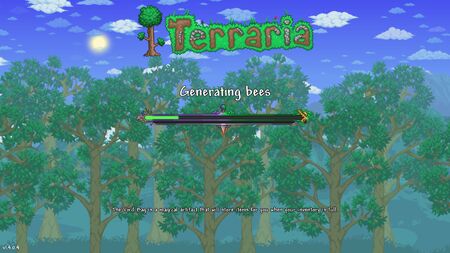 Screen shown while "Not the bees" is generating.

This seed references the NOT THE BEES! meme which originated from the 2006 horror film The Wicker Man. It generates a world dominated by bee-themed biomes and bee-related items and structures.

For the worthy[edit | edit source]

Map view of a world generated with seed "For the worthy". 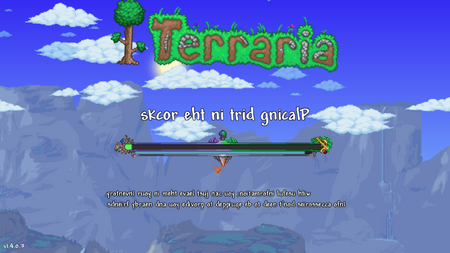 Screen shown while "For the worthy" is generating.

This special world's features aim to drastically increase the difficulty of the game. It is referred to in the code as getGoodWorldGen.[4] "For the worthy" directly references the tooltip of the Red Potion, "'Only for those who are worthy'".

Many bosses and/or their minions are either larger or smaller than normal:

All bosses (with the exception of Duke Fishron and the Moon Lord, whose size is also not altered) receive certain changes to their AI: