For tips on navigating the Dungeon, see Guide:Surviving in the Dungeon. 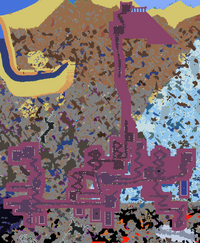 Map view of a Dungeon in the

The Dungeon is a vast underground labyrinth made of Bricks that is generated on world creation, being located on either the far right or left of the map, and contains unique enemies whose spawn rates increase the deeper a player travels. It begins at an above-ground entrance structure resembling a castle, and extends down to near-Underworld depths. One Dungeon is generated in each world. Accessing the Dungeon requires first defeating Skeletron (see Access below). The Dungeon can appear in one of three Dungeon Brick colors, and with one or more Dungeon Brick Wall patterns, which is randomly generated at world creation.

Mobile version, some passages are blocked off by Cracked Dungeon Bricks. These blocks look almost identical to regular dungeon brick, but appear slightly crumbled, and drop no blocks when destroyed. Breaking one block may break adjacent false blocks in a chain similar to the behavior of Desert Fossil. False blocks may also break spontaneously when the player walks on them or uses a grappling hook. Using a Dangersense potion will highlight these blocks. Cracked Dungeon Bricks also conceal large, rectangular rooms lined with spikes and occasionally filled with water, so caution is advised.

The Dungeon contains a dense assortment of unique furniture and Mechanisms that can be retrieved by the player for later use. Several Dart Traps are Wired to Pressure Plates, providing an extra hazard to players. Traps like these can also sometimes be found above-ground at the Dungeon's entrance. Chain Lanterns are wired to Switches, which the player can toggle on and off. The bound Mechanic is also found here, and is freed when spoken to.

There are several locked Gold Chests containing both loot unique to the Dungeon and standard Underground loot. A Golden Key is required to open each of these, and will be consumed upon unlocking a chest. Locked Biome Chests are also present, but they can only be opened after Plantera is defeated and the player has obtained a respective Biome Key.

After Plantera is defeated, the Dungeon spawns new, more powerful enemies, which offer access to new items. Not all enemies spawn in all Dungeons: The particular background wall type generated for a particular Dungeon, as well as the corresponding Faction Flags scattered around, determine which post-Plantera enemies spawn there (see below).

There are many shelves in the Dungeon, on which are Books, Lesser Healing Potions, Lesser Mana Potions, and occasionally Water Bolts, which appears as a blue book with a yellow stripe in placed form. Crystal Hearts can not spawn in the Dungeon.

Mobile versions, after a player defeats Golem and Skeletron in a world, a group of 4 Cultists will spawn at the entrance of the Dungeon. Killing them will summon the Lunatic Cultist, and killing the Lunatic Cultist will initiate the Lunar Events, an end-game event.

The player can tell if the requirements to spawn Dungeon Guardians are met if the music changes to the Dungeon track, or if they have a Depth Meter equipped that reads "Level" or "X' Underground". Dungeon entrances are located at varying heights, but are always some distance above zero depths, making their entrance structures and 1-2 screens of depth generally safe from Guardians.

When Plantera is defeated for the first time in a world, the status message "Screams are echoing from the dungeon..." appears, meaning that new enemies will now appear in the Dungeon. They are generally much more difficult than ordinary Dungeon enemies, and drop new powerful items. It also becomes possible to open the Biome Chests present in the Dungeon.

The particular post-Plantera enemies that spawn in a Dungeon area are biased by the background walls, present, which also correspond to the Faction Flags found naturally placed in the area. A single Dungeon can contain multiple background wall types in different sections, or just one type. Whether a Dungeon contains different types can only be determined by exploring the Dungeon. Each wall type has "usual" enemies to spawn, but there is always a small chance of other Dungeon enemies spawning, and this chance is increased if a lucky player is present. For example, Skeleton Snipers can still rarely spawn in areas with Dungeon Brick Walls, even if no Slab Walls are nearby. 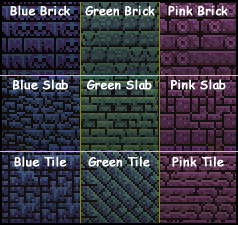 A Chest high enough to be looted prior to defeating Skeletron.

Dungeon Heist • “Steal a key from the dungeon's undead denizens, and unlock one of their precious golden chests.”
Unlock your first Gold Chest within the Dungeon.

Big Booty • “Unlock one of the dungeon's large, mysterious chests with a special key.”
Open your first Biome Chest.

Robbing the Grave • “Obtain a rare treasure from a difficult monster in the dungeon.”
Obtain a rare item from an enemy in the post-Plantera Dungeon.

For tips on navigating the Dungeon, see Guide:Surviving in the Dungeon.