Desktop/Console-Only Content: This information applies only to the Desktop and Console versions of Terraria.
Eternia Crystal

Map Icon
Statistics
Sounds
This article is about the NPC. For item used to start the event, see Eternia Crystal.

The Eternia Crystal NPC is a background object that is the centerpiece of the Old One's Army event. 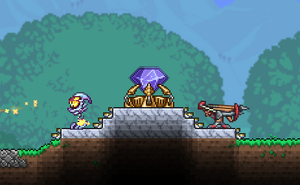 Eternia Crystal in its stand