An Evil Biome is a naturally spreading, hazardous biome that has generally negative effects on entities inside or around it. The Corruption or The Crimson will always spawn in a world. A generated world will only contain one of the two biomes, each with a 50/50 chance.

A player can choose whether they want Corruption or Crimson to generate in their world or they can leave it up to the 50/50 setting. However, on the

Console version a player has a choice only if Hardmode has been entered in at least one world.

This biome is saved as the world's naturally generated Evil Biome, and determines:

It is possible to create an artificial Corruption/Crimson, seeding an area with the "wrong" evil. This is traditionally done with materials brought over from another world, but 1.4 provides a new option: If the Dryad is housed in a Graveyard during Hardmode, she will sell the other evil's Seeds during a Blood Moon.
Note: The type of Biome Key

dropped by enemies is dependent on the biome the enemy is killed in, regardless of whether it is a "natural" biome or "artificial" biome. This will not however provide a Dungeon chest to go with the key.

The biome is predominately comprised of chasms made from infected stone (Ebonstone or Crimstone). However, the biome can overlap other biomes, providing corrupted versions of the Forest, Desert, Snow, Jungle or Ocean biomes. This can be evidenced by the presence of purple/red grass and Ebonwood/Shadewood trees, purple/red Cactus and Ebonsand/Crimsand, Purple Ice/Red Ice, or purple/red Palm Trees. Unfortunately, infected Jungle areas turn into corrupted Forest (with the mud converted to dirt). This makes such areas much harder to recover, though the presence of Chlorophyte ore can help.

While in Pre-Hardmode, the only biome capable of spreading the evil biomes is infected surface Forest, via infected grassy blocks (see below for details).

Certain items are exclusive to either The Corruption or to The Crimson.

The following items are considered counterparts to each other. It should be noted that counterparts do not necessarily share the same stats or behaviour.

The Corruption presents a purple "corrupted" theme, with purple grass, trees and stone. Thorny Bushes and unique enemies (beginning with Eaters of Souls and Devourers) make the area dangerous and potentially deadly for newer players. The Eater of Worlds can only be summoned in the corruption. The Corruption contains deep vertical chasms (which can easily result in death from fall damage), with cross tunnels well below ground. Shadow Orbs appear deep underground, usually at or near the bottom of chasms. Destroying a world's first shadow orb will always drop a Musket and some Musket Balls, which automatically fulfills the criteria for the Arms Dealer to arrive. Destroying 3 shadow orbs will result in the spawning of the Eater of Worlds. 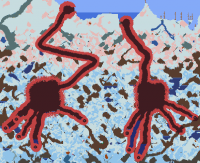 Chasms of The Crimson

In contrast to the Corruption, the Crimson presents more of a red, gory theme, with red grass, stone, and foliage. Unique enemies that only appear on a crimson world include Blood Crawlers, Face Monsters and Crimeras. The Brain of Cthulhu, the alternative to the Eater of Worlds, can only be summoned in the crimson. Crimson-infected stone is called crimstone, and like its corruption counterpart, can only be mined with a Nightmare Pickaxe/Deathbringer Pickaxe or better. Like the corruption, the crimson contains deep chasms, but these are differently shaped: A winding tunnel from the surface leads to a large cavern, with secondary tunnels spreading downward from the cavern.These tunnels look quite like hands. While long falls are less of a hazard here, the area is still quite dangerous. Instead of Shadow Orbs, the Crimson contains Crimson Hearts, placed at or beyond the end of the secondary tunnels. Destroying a world's first crimson heart will drop The Undertaker with some Musket Balls, which, like their Corruption counterparts will fulfill the criteria for the Arms Dealer to arrive. Destroying 3 Crimson Hearts will result in the spawning of the Brain of Cthulhu.

Both the Corruption and the Crimson will spread themselves, similar to the Hallow. This means that they slowly convert certain susceptible tiles that are in the vicinity of existing Corrupt/Crimson blocks. While their spreading capabilities are very limited during pre-Hardmode, they spread much faster and more aggressively after defeating the Wall of Flesh. Defeating Plantera for the first time reduces the overall spread speed of all three biomes by 1/2 (50%).

A properly contained Corruption and Hallow, which, while not considered an evil biome, can eventually spread out of control.

In Hardmode, the Corruption or Crimson (like the Hallow) can spread out of control; without player efforts, the evil biome and Hallow will together take over the entire world.

In Pre-Hardmode, players can use Purification Powder to purify small portions of the corruption/crimson, and Sunflowers to block spread of infected grass. However, it is not until Hardmode that the spreading biomes become a major issue.

In Hardmode, a good strategy is to dig 3 tile wide tunnels around the corruption/crimson, containing it. However, near the surface Thorny Bushes can spread the corruption up to 6 blocks, so the tunnels there need to be 6 tiles wide or lined with non-corruptible blocks.

Removing the Corruption or Crimson wholesale, or reversing its spread in Hardmode, effectively requires the Clentaminator. This can be purchased for 2000000*2 (one of the most expensive items in the game) from the Steampunker, who arrives after at least one mechanical boss has been defeated. Using the Clentaminator with Green Solution (also purchased from the Steampunker) can purify large sections of the evil biomes. However, most players will want to keep some well-contained pockets of the biome, as the enemies there have unique drops (some of which are recommended to advance in the game).

The evil biomes are also blocked by the presence of the Hallow, and vice versa; even before obtaining the Clentaminator, seeding the Hallow is an alternate strategy to limit the spread of Corruption or Crimson. However, this may mean eventually having to deal with an out of control Hallow in the future.