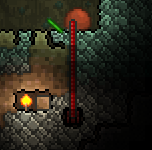 A naturally occurring block of Explosives, wired to a Gray Pressure Plate to form a trap.

Explosives are a placeable, consumable mechanism that can be triggered using wiring. Triggering them causes a large explosion that covers a radius of ten tiles (up to 314 blocks total), destroying most placed blocks and items (except for explosion-proof items), and inflicting around 500 damage to entities – meaning they can kill or severely damage even players with late-game gear.

can be found rarely underground, usually next to a vein of ores. Explosives can also be crafted.