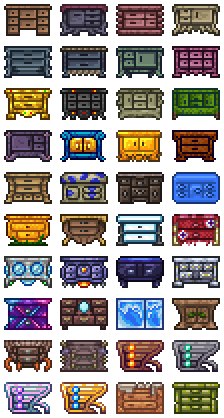 Placed Dressers. Click the image to view a summary of each row.

The Dresser is a piece of decorative furniture and

a storage item. It will also fulfill a house's "flat surface item" requirement, and a Bottle can be placed on top of it to function as a crafting station for potions.

Currently, there are 32 different types of dressers; 27 craftable and 5 noncraftable versions which must be looted from various locations in the world.

Hovering over the top half of a dresser displays a small dresser icon (or, if it was renamed, its name). Pressing the ⚷ Open / Activate button there opens the dresser like a chest, with the same amount of storage space and ability to be renamed.

Hovering over the bottom half of a dresser displays a small shirt icon (or, if it was renamed, its name in front of the shirt icon). Pressing the ⚷ Open / Activate button there opens a prompt that allows the player to recolor their default clothing. This interface contains separate hue, saturation, and lightness settings for each of four character body sections: torso, sleeves, pants, and footwear. The coloration only applies to the player's default clothing; in order to recolor armor, accessories or vanity items, dyes must be used instead. Clothes can be changed repeatedly and limitlessly at no cost. This interface can be used to change one's default clothing between the options available at character creation by clicking on the character in the tall box.

Right-clicking a Dresser displays this screen.