Desktop/Console-Only Content: This information applies only to the Desktop and Console versions of Terraria.
Gem Locks 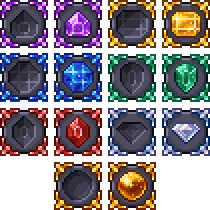 Placed Gem Locks, in both their on and off states.

A Gem Lock is a special mechanism which acts as a container or altar for a Large Gem. A Gem Lock will emit an activation signal if the corresponding Large Gem is placed inside it and once again if it gets removed. This allows for a simple contraption that uses only one mechanism to keep something like a door open as long as the gem is inside the lock, because if it gets taken out it will immediately close.

Gem Locks are primarily used in the making of adventure maps, where the player must complete some objective to be rewarded with the gem required to continue.