Desktop/Console/Old-gen console/Mobile-Only Content: This information applies only to the Desktop, Console, Old-gen console, and Mobile versions of Terraria.
Gemspark Blocks 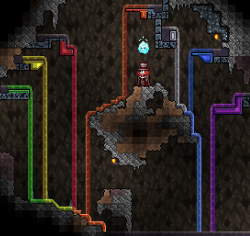 Gemspark Blocks are blocks that glow. The color of the glow depends on the gem used to craft the block. They are also considered mechanisms, as their glow can be toggled by wiring them to a trigger. Gemspark Blocks are crafted from Gems and Glass at a Work Bench.