Desktop/Console/Mobile-Only Content: This information applies only to the Desktop, Console, and Mobile versions of Terraria.
Glowing Mushroom Dye 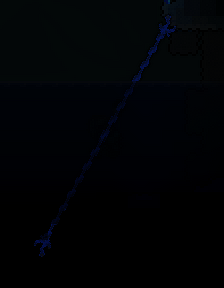 A Slime Hook colored with Glowing Mushroom dye, in the dark.

Glowing Mushroom Dye is a dye obtained by trading Strange Plants found in the world to the Dye Trader. It colors the object it is used on a deep blue color. Like the name implies, objects colored with this dye will also glow slightly in the dark. Though it does not give off any light to see nearby objects with, this can be useful to increase awareness of where the player is.