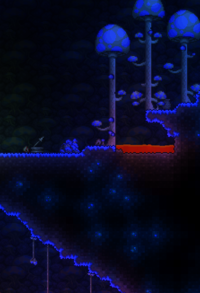 The Underground Glowing Mushroom biome in 1.4.0.1.

Desktop version, Underground Glowing Mushroom biomes are large, layered caverns which feature mushroom "vines" hanging from the ceiling and surface-style Giant Glowing Mushrooms. They generate with set features, including a span of flat ground (for Giant Glowing Mushrooms to grow on) and a wide lake for fishing purposes. Spore Bats (which have a 1% chance of dropping the exclusive Shroomerang) and Spore Skeletons will spawn as well. Mushroom Chests found here will include normal Gold Chest loot, but also have a 50% chance of having the Shroom Minecart and a 33.33% chance of having the Mushroom vanity set.

Surface Glowing Mushroom biomes are Glowing Mushroom biomes above 0 depth. They do not generate naturally and must instead be created by the player. The sky is darkened in Surface Glowing Mushroom biomes, making it appear to be nighttime even during daytime hours. The background depicts towering mushrooms. Many exclusive mobs will spawn, including the Anomura Fungus, Fungi Bulb, Mushi Ladybug, Mushroom Zombie, and Spore Zombie, which provide a considerable challenge. In Hardmode, the former three will also spawn underground alongside the Fungo Fish (a type of jellyfish) and the Giant Fungi Bulb, the latter of which has unique mushroom projectiles that go through blocks.

Two critters spawn in the Mushroom biome. The Glowing Snail occasionally spawns throughout the game, but perhaps the most significant feature of the mushroom biome is the Truffle Worm, which is very rare and runs away from the player when they get too close (unless they have on an Invisibility Potion). However, when caught, they can be used as bait in the Ocean to summon the Duke Fishron boss, which yields incredibly powerful loot. 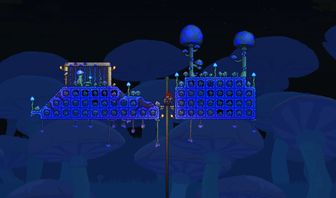 An example of a compact, "efficiently" made Surface Glowing Mushroom biome. The Truffle can be seen located in their own house.