The Ankh Shield is a Hardmode accessory which grants immunity to knockback and all of the following debuffs:

It is crafted at a Tinkerer's Workshop by combining the

Obsidian Shield and the

Although it is not necessary for game progression, it can be very useful. This guide is a tutorial for gathering all the individual items used to craft the accessory.

In the table below, the top rows contain items you are likely to acquire first, and items below them are the result of crafting them. An item with no other item directly above it is acquired from the environment or from an enemy drop.

Due to the amount of farming required to obtain the Ankh Charm, it's recommended to use Water Candles and Battle Potions to increase spawn rates. It's also good to farm during Blood Moons, since spawn rates will increase significantly as well.

It's also a good idea to find and build a good farming spot. For Underground enemies, a wide and open section of a cave can be used. It can also be good to build a 168x94 rectangle in order to concentrate all spawns in one area.

With the use of Lava, Traps and/or Minions it's very simple to make an AFK farm for the items.

Some of the components can be obtained before Hardmode: The Obsidian Shield, Bezoar and Nazar.

The Armor Polish provides immunity to

Broken Armor. It can only be obtained from Armored Skeletons and Blue Armored Bones.

If farming for Armored Skeletons in a Cavern, then the Trifold Map may also be obtained from Giant Bats. While Blue Armored Bones spawn more commonly, they require Plantera to be defeated.

Vitamins provide immunity to the

Weak debuff. This Hardmode item is a 1% drop from Corruptors, found in the Corruption and Floaty Grosses, which are found in Underground Crimson.

Farming in a Corruption biome is recommended, since the Corrupt Slimes and, if in a Desert, Dark Mummies will also drop the Blindfold and Megaphone. 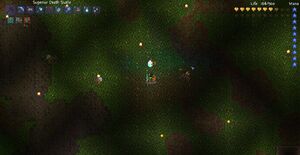 The Bezoar is a 1% drop from Toxic Sludge, Hornets and Moss Hornets, which gives immunity to the

Poisoned debuff. It's better to farm for it in pre-Hardmode, due to the high spawn rate of Hornets and the lack of the stronger enemies found in Hardmode.

This item is a 1% drop from Werewolves, Angler Fish and, once Plantera has been defeated, Rusty Armored Bones. It gives immunity to the

During a Full Moon, a significant amount of Werewolves spawn, making it easier to obtain the item.

The Fast Clock prevents the

Slow debuff, and it can be obtained as a 1% drop from regular Mummies and Wraiths and a 0.5% drop from Pixies.

Confused, and can be obtained by killing Clowns, Light Mummies and Giant Bats. Trying to look for Clowns is not recommended, as they are rare enemies that only spawn during a Hardmode Blood Moon. Light Mummies are found in a Hallowed Desert, while Giant Bats appear in the Cavern layer during Hardmode.

The Nazar is a 1% drop from Cursed Hammers, Cursed Skulls, Enchanted Swords, and Crimson Axes, which gives immunity to the

Due to Cursed Hammers, Enchanted Swords and Crimson Axes being rare, it's much easier to obtain the item from Cursed Skulls in a pre-Plantera Dungeon.

Silenced debuff and can be obtained by killing Dark Mummies, Pixies and Green Jellyfish.

Infecting a Desert with the Corruption or Crimson will make obtaining the Megaphone, Vitamins and the Blindfold easier.

A Blindfold will prevent

For efficient Blindfold Farming, corrupting a Surface Desert will spawn both enemies. Corrupt Slimes, found in the Corruption, split into 3 Slimelings when killed, and all yield a 1% chance of dropping a Blindfold, effectively increasing efficiency by 4-fold.

A similar strategy can be used in a crimson world due to the presence of Crimslimes and Blood mummies, however Crimslimes will not split resulting in a lower chance of obtaining a blindfold.

If you are in a Crimson world and are farming the mummies for the blindfold, it is not recommended to farm during a sandstorm as this will severely decrease the chance of getting dark mummies to spawn.