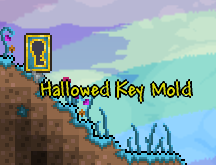 Biome Keys are used to open Biome Chests in the Dungeon, which provide access to some powerful post-Plantera weapons, such as the Vampire Knives and Rainbow Gun. But they drop at the very low rate of 0.04% (1/2500), and are only dropped when the player is in the key's corresponding biome. Thus, it is advisable to set up an efficient farm to obtain them.

3DS versions, Biome Key Molds drop in place of Biome Keys, which requires additional material from Plantera and Mechanical Bosses in order to be crafted into a Biome Key. 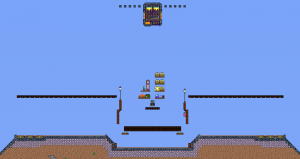 This is an example of an Arena which can be used to fight Events and farm the Hallowed Key or Mold, because of the Pearlstone Blocks below it.

Events are one of the best ways to farm Biome Keys and their Molds. An extremely large amount of Enemies spawn during events, and many of them will have a chance of dropping a Biome Key or Mold, supposing that you are in the appropriate biome in which one can drop.

Some events the player may want to consider using to farm:

Some Bosses can be used for farming:

The time it may take for Keys to drop makes AFK farms an option some players may consider. There are a few items that can kill monsters without player interaction: minions, Accessories, Armor sets, Lava, and Traps. Without player supervision, however, the character should be walled up as protection. The "waiting room" should be off-screen above the ground to avoid enemies that can pass through blocks, and protected by traps to prevent flying enemies from piling up, and decreasing the spawn rate. The event should also not feature flying enemies that can pass/attack through walls, such as Elf Copters.

Keep in mind that even while AFK farming, the player is still required to gather loot so to prevent items from despawning.

A piece of land transformed into the Hallow for mold farming. The surrounding shaft prevents the Hallow from spreading to the adjacent land.

If you want to artificially build a biome to farm Key Molds in, there are two ways to do so: