The Frost Moon is one of the two Moon events, the other being the Pumpkin Moon. The event is significantly harder than its counterpart and yields less money; however, it drops more powerful weapons.

Due to the amount of strong enemies and bosses, it can be hard to survive the event at first.

On the first Waves, the player will only encounter basic enemies, such as the

Elf Archers. As the event goes on, stronger enemies will spawn, including unique bosses.

On Wave 4, the first Everscream will appear, a miniboss enemy who behaves similarly to the Mourning Wood. Despite the high damage and the frequency of its attacks, it is a not a difficult enemy to deal with due to its incredibly poor vertical reach and relatively low health for a miniboss.

On Wave 7, the powerful Santa-NK1 miniboss will start spawning. It will shoot bullets at a high rate with its Chain Gun, a barrage of Rockets, and Presents that will parachute from the sky. It also leaves Spiky Balls on the ground, which deal massive contact damage, being capable of killing a player in one hit on Master Mode. When it gets to half health, it will become more aggresive. The high damage and rate of fire of its Chain Gun make this miniboss extremely dangerous and a very high priority in the event.

On Wave 11, the Ice Queens will start spawning. She shoots Frost Waves, which deal moderate damage and have a high chance to inflict the

Frozen debuffs, which will greatly limit or stop mobility. She will also perform an "Ice Twirl" attack, where she will start spinning and shoot Frost Shards in all directions. While this attack can be hard to dodge, she also becomes extremely vulnerable to attacks since she will completely stop moving. A well prepared player will not have many issues with her, as a Warmth potion will make all her attacks deal significantly less damage, and the effects of the Chilled debuff can be negated with a Mount.

Throughout the event, Present Mimics will occasionally spawn in place of other enemies. This enemy, while not hard at all to kill, drops Hearts as if it were a miniboss, making it a valuable target.

Like with the Pumpkin Moon, focusing on damage is more important than defense, as the goal is to progress through the event as fast as possible in order to obtain the best loot. 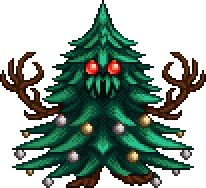 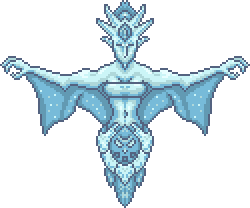 Extensive arena for the Moon Events, making heavy use of platforms, Asphalt and passive healing tiles.

Example of an arena, making heavy use of Traps. Note that on higher difficulties, Traps are hardly useful.

The Pumpkin and Frost Moons are much easier to handle with the proper arena.

A flat surface about 168 blocks wide (See NPC spawning) will focus all spawns on the arena. Above it there should be a long platform of the same width, high above the ground in order to keep grounded enemies out of reach.

Since the player will mostly focus on the Bosses on the later waves, Lava pit and Traps may be helpful to take out the weaker enemies more easily. However, on higher difficulties the Traps' low damage is practically useless against the higher-health enemies, making them almost a liability due to their piercing iframes and the risk of being hit by them and taking massive damage in the process.

It's also a good idea to make a room with a

Bed near the Arena, so in case of death you can quickly get back to it.

The event can be summoned at any time post-Plantera, however due to its difficulty it is usually done after Duke Fishron and the Pumpkin Moon, but before the Empress of Light and the Celestial Events.

Accessories should be modified to Lucky or Menacing for the event.

Mounts allow you to use another accessory instead of Wings and other support mobility items and are unaffected by the Chilled debuff, making them a much preferred movement option.