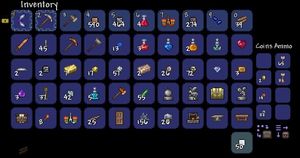 A full and cluttered inventory.

Keeping your inventory organized is very important when exploring in Terraria, as the goal is usually to fill your inventory with as many valuable items as possible. In general, the key to inventory management is the ability to tell valuable loot apart from junk.

While some loot objectives can be obvious (such as Golden Keys in the Dungeon or Souls of Light in the Underground Hallow), keep your eye out for unexpected valuable items. For example, if you come across a valuable Heart Statue but your inventory is full, you must decide what to throw out in order to make room for it.

The following guidelines will help you decide what to bring and what to keep on your adventure. Consider favoriting items if you decide that they deserve a semi-permanent place in your inventory; this will allow you to use "quick stack" and "deposit all" more freely.

These items are a near-must for your inventory in some form or another if you plan to do any serious exploration. Without them, many important activities become extremely inefficient, if not impossible.

Weapons are a player's primary means of self-defense, and in order to cover as many different combat situations as possible, it is recommended to carry a variety of them in your hotbar. Later in the game, it is better to specialize towards one of the four primary damage types (melee, ranged, magic, and summon) to conserve space but also that most Hardmode-accessories are not multi-class. If possible, use weapons that can attack from a distance, hit through walls and/or that can damage multiple enemies and be sure to bring enough ammo if using ranged weapons. Summoning weapons can contribute to any character's DPS, even without a dedicated armor set or minion buffs.

To reduce inventory clutter, it is important to know when to retire certain weapons. For example, the Snowball Cannon is a phenomenal weapon in the early stages of the game, but it will see little use after you obtain a Demon or Tendon Bow. If one is not going to multi-class, it is up to the player if they wish to carry a spare weapon or two for the two main combat-classes they do not utilize. Doing so may take up to 2-3 extra inventory spaces max but ensures they may be able to keep fighting in a tough situation, especially with mages to happen to periodically run out of mana.

Pickaxes are a player's primary means of interacting with the environment and Terraria ensures that you have access to a Pickaxe from the very beginning of the game. You only need one Pickaxe in your inventory, and it will generally be the one with the highest power you have access to but there are several viable exceptions that trade away pickaxe power for mining speed, such as the Bone Pickaxe and Shroomite Digging Claw.

Reaver Shark can only mine up to Demonite/Crimtane.

Lighting usually comes in the form of Torches. Glowsticks, Light Pets, Shine Potions, and the Mining Helmet can be used as substitutes, but unlike Torches, they will not permanently illuminate an area. Shine Potions or Mining Helms may still have some level of utility even into Hardmode, whether to conserve inventory space or to trade shine potions in place of torches for more intuitive exploring without having to stop. Stacks of Wood and Gel can be carried to craft Torches on demand.

If one wants to pay any attention to the Luck mechanic, Bone Torches are a good general non-biome choice instead of normal torches as they supply +0.5 torch luck.

It is highly recommended to carry these items if you have them.

Aside from modifying the terrain, blocks are useful for blocking the paths of enemies or even trapping them. All blocks are equally useful for this purpose, but dirt, stone, and mud are likely to be the most plentiful. However, this does not mean they are infinite, dirt and such are finite in a world despite that. In a pinch, Wood can also be used this way but be sure to reserve some Wood for crafting Torches and Work Benches if you need them.

Dirt is however renewable with Dirt Bombs.

Platforms can be used to quickly build arenas, and are useful to climb to high places early in the game (such as searching for sky islands) when mobility is still limited. A stack of Wood or Ice Blocks can be crafted into platforms by hand, and the extras can be crafted back into blocks, so it is not strictly necessary to dedicate an inventory space to them.

Blocks can be also used to dupe liquids, for self-made fishing spots or otherwise via using a 'U shape' and hammering either top block then holding left-click with a bucket right above the hammered block.

Bombs and Dynamite, especially when crafted into Sticky Bombs or Sticky Dynamite, are a relatively plentiful and speedy way to excavate large areas. Early on, they can also be used to bypass certain requirements, meaning that they can be used to mine Crimstone/Ebonstone

but they cannot be used to mine Meteorite, however.

Mobile versions, Grappling Hooks have their own equipment slot, and as such, they do not interfere with inventory management. On other platforms, the mobility that hooks provide can be used to escape dangerous situations and navigate the terrain, making them well worth the single inventory space that they take up. There is no need to place them in the hotbar.

Informational Accessories provide extra information that can be useful during exploration, but the most valuable ones are the Platinum/Gold Watch, Lifeform Analyzer

or a Recall Potion will instantly return you to your spawn point. Recall Potions work with no delay, making them more suited for Hardcore or Mediumcore characters who need to quickly escape a nasty situation. Those who are quick with their reflexes can simply activate the Magic Mirror from the inventory screen when needed, saving a hotbar slot for something else.

An alternative means of escape is the Rod of Discord.

Healing Potions are one of the main methods of restoring health in dangerous situations and should be used frequently, as they are obtained in plentiful supply from bosses and naturally-generated Chests. If you have lost more health than your best healing potion would heal for, use one. They can be activated from the inventory with a hotkey. Honeyfins are a viable alternative pre-Hardmode, assuming one wishes to take the time to fish a supply up.

A Piggy Bank, or ideally a Money Trough

, acts as a personalized, portable storage box. Piggy Banks can only be placed on flat surfaces like a Work Bench or Platforms, but the Money Trough can be summoned anywhere. It is recommended to use the Piggy Bank to store money and items that you use regularly but infrequently, such as Fishing Rods. A Safe can provide extra storage should you need it, and can itself be stored in the Piggy Bank, freeing an additional space. If not using the Money Trough, be sure to pick up your storage items after you are done.

The Defender's Forge was introduced in 1.3.4 and not only does it add much further storage-capability on the go, it's cheap medal-price means it is relatively accessible early to mid-game.

There is also the Void Vault and Void Bag, the latter being very useful because it can pickup items when the player's main inventory is full.

Several potions are useful and are worth taking up a couple of inventory slots:

Apart from the armor equipped in your armor slots, there is some merit to carrying around extra armor sets in the inventory. Several sets, notably Crimson and Palladium armor as well as the individual pieces Squire's Great Helm

, provide a sizable regeneration bonus and are useful for healing outside of combat. Spectre armor is another useful armor switch as it provides rapid burst healing.

It may also be useful to keep a Mining Armor set (or other mining-speed boosting gear), Mining Potions and/or an Ancient Chisel, whether in inventory or in a piggy bank/safe.

One should consider keeping gems as every gem except for Diamonds can be made into Stained Glass. Even with the least valuable gem (Amethyst), this nets a profit of 1500*15 per Amethyst compared to selling 20 Amethysts by themselves. If one reserves any gems found from extended spelunking, one can average around 3-5000000*5 in profit.

For even easier profit, gems are renewable via Gemcorns.

Oysters can be very profitable if sold in bulk via opening them and selling whatever contents obtained. The guaranteed Shucked Oysters can be profitable (netting almost 200000*20 per 99-stack) while 2-5 White Pearls or 1-3 Black Pearls tend to be more profitable per full stack of oysters, if a player is saving Pink Pearls for the best luck potions.

Crates are a good money-source even well into Hardmode. A large stack of crates can net significant profit, massing into the value of multiple Platinum.

Cobwebs can provide a large amount of easy profit well into mid pre-hardmode via mass-crafting them into Silk and once the Dungeon is accessible, it is better to use Cobwebs with Bones to make Necro Helmets.

Boss and event-summoning materials such as Lens, Rotten Chunks/Vertebra, Tattered Cloth etc can be stocked up to make into boss/event summoning items, which allow far greater profit than if one was to sell said materials by themselves. They still have utility even in Hardmode as Lens, Iron Bars, etc are still used for the mechanical-boss summoning items.

Obsidian can be more than mildly profitable, especially if kept in bulk. Obsidian Skulls not only are required for multiple accessories including the Ankh Shield but are the most profitable option if mass-mining Obsidian for money and good modifiers can slightly increase profit. The Bottomless Lava Bucket and Bottomless Water Bucket can provide a renewable source of Obsidian but the latter is Hardmode-only.

Whether you wish to bring the following items with you is largely up to personal preference. They can be stored in a Piggy Bank to save inventory space.