The Desert is one of the main biomes of a Terraria world. The Surface isn't much harder than the Forest, but the Underground Desert contains unique hazards that can make it very dangerous for a new character.

It's optional to explore the Desert, but since it has more loot than regular Caverns, players prefer to explore it instead of regular biomes once they feel like their gear is good enough.

In Hardmode, the Desert will provide the materials for very good weapons that can be obtained at the very beginning of it.

The Underground Desert is extremely dangerous for a new character, since the enemies do much more damage and have higher defense than usual. Hence it is better to be very well prepared. It's recommended to explore it just before or after the Eye of Cthulhu is fought.

There isn't too much to do in the Surface Desert, but at the start of a playthrough, the

Cactus Sword are both very useful to begin with. However, if there is a Sandstorm the place should be left immediately, as the

or other enemies can very easily kill a new character.

A Pyramid can also be found. This place contains one unique item like the

Sandstorm in a Bottle or the

Pharaoh's set, and many Gold Coins.

On the side of the world that is opposite to the Snow biome, the entrance to the Underground Desert will be found. 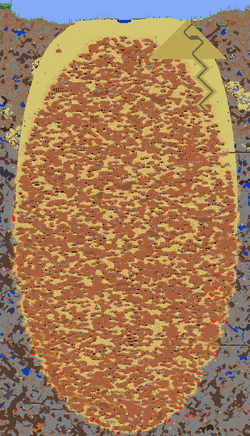 A world view of an underground desert with a Pyramid.

However, the enemies found are very dangerous:

Once the Eater of Worlds or the Brain of Cthulhu have been defeated, the player can use the

Deathbringer Pickaxes to mine the

, which are the only source of

when using the Extractinator. This material is used for

and Bone Throwing Weapons, which are very helpful for the Thrower class. On the

can be mined with any pickaxe and explosives, and are an effective weapon for the Ranged class.

Like every other biome in Hardmode, the Desert becomes a lot more dangerous once it is activated. It is also one of the biomes that can be affected by the spread of the Corruption/Crimson and the Hallow, which give special properties and drops to some of the new enemies spawned.

The Desert can be very tough when starting Hardmode, so it is recommended to be very well equipped before going in.

For the three main classes,

Titanium armor are the best available.

A Summoner should use the

instead, as the ore armors don't give any improvements to minions.

On the Surface, the only new enemy seen will be the

Mummies. They are slow and easy to avoid, however they get much faster at half health. If the surface Desert was infected by the Corruption/Crimson or Hallow biomes,

Light Mummies will spawn instead. These variants are stronger and drop Dark or Light Shards, which can be used to make very strong weapons.

In the Underground Desert, many new enemies will be seen:

Additionally, during a Sandstorm, enemies from the underground and Sand Sharks will start spawning on the Surface, as well as a new miniboss: the Sand Elemental.

While the Sand Elemental's attacks can be easily predicted and dodged, they will limit movement, making the common Sand Sharks and Dune Splicers much harder to avoid. It is recommended to make a platform above ground, as then the Dune Splicers and Sand Sharks won't be able to jump high enough as to reach the player, so the Sand Elemental can be killed much more easily.