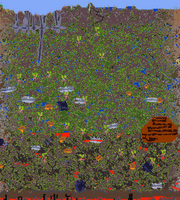 The Jungle is one of the hardest areas to survive in Terraria, as it has some of the toughest enemies in the game along with increased spawn rates. The majority of the Jungle spans Underground, which is where the most of its treasures and hazards are located.

If you're new to Terraria, then you will find exploring the Jungle very hard: Man Eaters will reach out to you through walls and the Hornets can shoot their stingers at you which may inflict the Poisoned debuff. Even the Jungle Slime packs a lot more life than most slimes. Therefore, navigating the Jungle safely usually entails taking it slow and not trying to run past enemies, and tunneling around dangerous areas to reach the treasures.

In Pre-Hardmode, the Jungle is usually tackled after dealing with Corruption or Crimson, and can be done before or after visiting the Dungeon, but it's usually avoided before going into the Underworld.

In Hardmode, the Jungle can be explored at any time, but it's usually done after defeating the Mechanical Bosses, as it's mandatory to defeat Plantera and Golem and to obtain Chlorophyte.

The Jungle is located either left or right, and it's opposite to the Snow and Dungeon. If you find the Snow, go to the other side to find the Underground Desert and past it, the Jungle. (Note that in 1.4, Underground Deserts aren't guaranteed to have visible entrances, so it is better to look for the snow biome and then go the other way if you find it.)

The Underground Jungle is located directly below the surface, and there are usually cave entrances to it. On

versions, the threat of Dragon Snatchers make the Surface Jungle a lot more dangerous, so the player should quickly go underground.

The enemies found in the Underground Jungle are harder to deal than in any other biome, especially since most of them will

poison the player. Additionally more enemies will spawn compared to the regular Cavern, but less than the Dungeon. It is easy to die in this environment, so caution and knowledge of how to deal with the enemies is advised. The most dangerous enemies are: 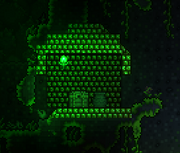 In the Pre-Hardmode Jungle, there are three things to do: Get Jungle Spores, find Ivy Chests and the Queen Bee's hive.

Jungle Spores can be found anywhere underground, and their position is easily given away by its glow. With these, the player can make strong weapons such as the Blade of Grass and Thorn Chakram, the Ivy Whip, and for mage users, the Jungle Armor.

Ivy chests appear in Jungle Shrines or Living Mahogany Trees, the former of which can be seen with the glow of the Green Torch placed in them. They contain many useful items that can't be found anywhere else, such as the Boomstick or the Staff of Regrowth.

Melee players may also want to find a Sharpening Station in the Underground Cabins, as it provides a free buff which will slightly increase the damage of Melee weapons.

Simply explore the jungle by digging through the mud, or placing blocks to keep yourself "sealed" inside a protective layer of dirt. Hornets cannot fly or fire through blocks. Man Eaters can pass through blocks, but they are rooted to one position, and are predictable. Simply keep extending your tunnel until you get to the position where your sword can just barely reach the Man Eater when it bobs outwards, and hit it when it comes within range. A good weapon for this method is the Vilethorn, since it can fire through the walls. Then, when ready, break down your bunker, and go fighting again. Rinse and repeat as you advance.

As you go, place torches everywhere - this gives you the chance to actually run and fight later without worrying so much about the darkness.

Similarly to the previous, just work upon trying to cut away any major obstacles to your movement, and light up the place as well as possible. Place blocks and doors in positions that tactically block off the enemy or give yourself breathing room; flatten terrain, drain water, add torches, and otherwise make a better fighting platform to explore.

It is ideal to make the roof fully obstructed with with stone slabs or platforms to prevent the nuisance of vines and Beehives from spawning as obstructions. A good multi-grapple hook is very helpful for reaching the ceiling. Alternatively, double click with a hammer to slope the grass block and prevent them from attaching. Finally if neither of these are possible, at least block off any 2x2 placement spots for the beehives by making the ceiling as uneven as possible, by placing mud blocks every other tile (B-B-B). This also applies when digging sideways tunnels, which should have a double height 5/6 tile ceiling to allow jumping to avoid monsters or thorns, again fully lined with stone slabs to prevent vines blocking vision.

Apart from thorns, which have much lower damage than the monsters, the floor does not present much danger. In fact where possible it is best to flatten it, this makes it easier to spawn bushes for bait. This does have the useful side effect of possibly making it easier to see thorns (although it may also be necessary to place lighting and a wall for contrast).

The Underground Jungle in Hardmode is one of the most dangerous biomes of the game. Below you'll find all the hint and tips needed to progress through it, until you get to defeat Plantera and get access to the Jungle Temple.

The Underground Jungle can be explored at any time, but there's no real reason to do so until the Mechanical Bosses are Defeated, since nothing very special can be obtained without Chlorophyte, which requires the Pickaxe Axe.

It is very hard to survive in the new Jungle due to the extremely strong enemies that can now be found, mainly the Derplings and Giant Tortoises. There isn't much to do in the surface, so it's recommended to quickly go underground as the Derplings will stop spawning.

Once underground, the main thing to do is to mine Chlorophyte with the Pickaxe Axe or Drax. With Mining and Spelunker Potions it is easily acquired. The player will need a lot of it, since it's required for Chlorophyte armor and some of the strongest weapons available, as well as being used for Post Plantera equipment.

While mining, the player may find Plantera's Bulb, which can be easily seen since it glows in the dark. The bulb should not be touched until the player feels ready to fight Plantera, as breaking it will summon the boss.

Life Fruits may also be found, and they should be collected since the extra health is extremely useful for bosses.

Just like every other biome in Hardmode, the player will find many new enemies, the most dangerous being: