There are two Oceans, one at either side of the map. In the early game, oceans mainly provide accessories and weapons to further improve your ability to travel through water. Additionally, they are the only source of Shark Fins, Coral, and Pirate Maps, as well as the dye materials Black Ink and Purple Mucus. In late Hardmode, it is usually visited to summon Duke Fishron by fishing with a Truffle Worm.

The main threat of the Ocean is the very water it is composed of, which players can drown in. Second to this are Sharks, which ambush players with high speed and melee damage.

The ocean can be reached by travelling on foot to the edge of the world, using a Magic Conch found in the Underground Desert or Oasis/Mirage Crates, or teleporting with an Ocean Pylon.

Depending on game progression, you may have collected various equipment from Water Chests or Ocean Crates. Any of these items will make diving into the ocean much safer.

Other useful items include the following, which can be found commonly as part of normal chest loot: 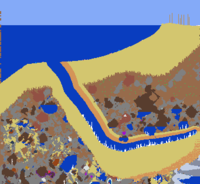 Map view of an Ocean Cave on the left side of the world.

The Ocean contains Water Chests at its bottom, and has a 25% chance of extending into a cave-like structure which contains additional Water Chests. A quick but risky strategy to loot these chests early-game is to obtain a Recall Potion and Glowsticks and then immediately dive in, looting chests as quickly as possible until your breath runs out, at which point you drink the Recall Potion to escape. Lucky players may immediately find one of the above items and be able to continue their expedition, surfacing to breathe as needed.

Players may wish to collect Coral, an alchemy ingredient which grows on the surface of submerged Sand blocks.

As mentioned before, a great threat in the ocean comes in the form of Sharks. The countless Pink Jellyfish in the ocean can also be a problem if they swarm you, but their glow allows them to be seen at any distance and avoided easily. To deal with enemies, consider bringing a set of Iron armor or better, as well as a Spear, Boomerang, or any Gem Staff. Low-knockback weapons such as early Swords are useful against the Pink Jellyfish and Crabs, but cannot hold back a Shark.

Visibility is also a concern down at the ocean depths. While Pink Jellyfish give off light, Sharks and Crabs do not, and can strike unexpectedly from the darkness at any time. The most readily source of aquatic lighting available would be the Glowsticks dropped by jellyfish, as torches do not work underwater. The Mining Helmet or Shine Potion can help provide light, as well as the rarer Jellyfish Necklace dropped by jellyfish. A Hunter Potion can be used to clearly see the locations of enemies.

Fishing in the ocean yields some powerful pre-hardmode loot, all of which can be obtained as soon as the player obtains a fishing rod and bait. This makes ocean fishing an effective way to gain a head-start in the early-game.

Fishing in the ocean may grant the following crates:

A Diving Helmet dropped by Sharks will allow you to breathe underwater for much longer, and can be combined into Diving Gear and Jellyfish Diving Gear to allow swimming and providing light.

No new enemies appear in the ocean during Hardmode, although enemies now have a chance to drop the Pirate Map. Any Wings will let you easily surface from the ocean, and a Neptune's Shell or better will act as a permanent Flipper and Gills potion, making the ocean trivially easy to survive in.

Consider building a platform across the surface of the ocean, which will make it easier to stay at the ocean surface without falling back in. This platform will also prove useful when fighting Duke Fishron.