This page is about the NPC. For Guide articles, see Terraria Wiki:Projects/Guides. 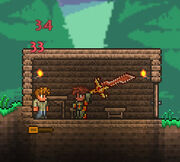 When the Guide Voodoo Doll is equipped, the player can attack the guide.

The guide shooting a zombie

The Guide is the first NPC a player encounters. He spawns near the player when the world is created. He provides tips mainly aimed at new players and displays possible crafting recipes for items shown to him.

Unlike most other NPCs, the Guide spawns on world creation, before a House is available. He will however move into the first House built. If he is killed, a proper House will need to be built before he can respawn.

Mobile, the Guide will defend himself against nearby enemies using a Wooden Bow and arrow, firing Wooden Arrows initially and then upgrading to Flaming Arrows in Hardmode.

Some quotes may vary depending on what version of Terraria is being played.
At the beginning of the game:

If ore is inside your inventory:

If bars are inside your inventory:

If you have unobtained NPCs:

The guide may have any of the following names: Guide/Names

In addition to tips, the Guide also has various quotes:

During a Blood Moon:

When the Tavernkeep is present:

Appease the Volcano Gods • “You sacrificed The Guide in boiling hot magma!”
Let your Guide die in lava.

Homicidal • “You killed The Guide, you maniac!”
Equip the Guide Voodoo Doll and kill the guide.