Under Storage, it says that some NPCs can "raid" things from nearby chests. I have never encountered this, so it should probably be tested.

It's actually all the same page. You can include other pages as inline content. If someone edits the Gardening page, it changes this page. --Theothersteve7 20:12, 13 June 2011 (UTC)

Getting NPCs to move houses[edit source]

According to the text, "Getting NPCs to swap houses is very annoying and difficult, usually requiring the intentional death of at least one NPC." Huh? I thought all you had to do was simply make that NPC's house not a house any more simply by removing a vital component, for example by removing the light source and furniture (the least destructive options). Then all you have to do is prepare a replacement house, and it'll go there.

All this is now moot after the v1.1 update since you can now simply reassign NPCs to different houses via the Housing interface. - Spinfx 01:13, 22 December 2011 (UTC)

When attempting to move some NPC's, I keep getting the error of "This housing is not suitable." Nothing else, no notification that anything is wrong. When taking out necessities, it specifies those, but upon adding them in and selecting who to move into that house, I get this error. Any ideas as to how to fix it? 50.130.130.102 23:16, 1 December 2011 (UTC)

Houses need to have a minimum size and a free square for the NPC to stand on -- and those criteria can be affected by open doors! The doors really messed me up; I'll update House with those details. --Sinister Stairs 16:33, 16 December 2011 (UTC)

I question the advice of building your base away from the initial spawn point. It's not that hard to dodge the goblin invasion if that's what you want to do (just leave the area, or save and reload), but most first-time players would probably prefer to experience it at least once.

On the other hand, your initial spawn point is where you go if your current spawn point is destroyed and then you die or use a magic mirror. You can exploit this for fast travel back to your base (just remove your current bed and then magic mirror), which is quite useful. Furthermore, since goblin peons break doors, it's possible for your spawn point to be unexpectedly destroyed during a goblin invasion, at which point if you die you'll respawn away from your base AND in the middle of the goblin hordes--kind of the opposite of the intended effect. --Manxome 08:10, 8 December 2011 (UTC) 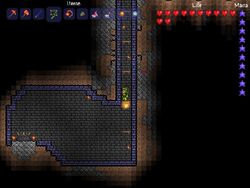 The Crafting area section includes the image to the right, with the caption "Safely walled-in Demon Altar." Can you explain why it needs to be walled in? The main Demon Altar page doesn't mention anything about walling them. --Sinister Stairs 16:33, 16 December 2011 (UTC)

If you don't wall in an area, enemies can spawn there. I wanted a demon altar that I could access perfectly safely. That's all. --Theothersteve7 16:36, 16 December 2011 (UTC)

A similar issue, the note in the list to the left says "(Cannot be moved or placed. House must be built around one of them. See picture)" This is no longer true. I think this should be removed or changed to reflect Theothersteve7's intent for walling off his demon alter. Fright01 10:10, 28 March 2012 (UTC)

Hazards are not limited solely to monsters; in light of this it would be a good idea for someone who's familiar with hardmode to add some advice on preparing for it - especially with regards to containing the spread of Hallow and Corruption, and perhaps dealing with creatures with unorthodox attacks like those which can pass through walls to get at the NPCs (wyverns?) and those which can affect items (clowns and their bombs). Like for example creating boundaries using dungeon bricks since those can't be bombed apart, and excavating a generous gap around farm areas so they don't get contaminated by the spread of Hallow and Corruption. As evidenced by the various forum threads many players don't actually realize how dangerous hardmode can be to not just themselves but their bases as well. It would save a lot of grief especially to the casual builder-type players - Spinfx 04:58, 20 December 2011 (UTC)

Possessed Armor and Wandering Eyes work just like their weak counterparts, I believe. However, Wraiths can pass through walls, but they are hovering creautres, so they don't truly fly. Building your castle in the sky will prevent any Wraith incursion (unless they spawn above and fall on you). I can't think of any other especially tricky enemies that would spawn in a normal forest off-hand.

Halting the spread of Hallow and Corruption can be trickier, primarily because they spread underground. On the surface, block grass growth with 3 blocks of unaffected material (such as Wood). I like to make a 3 by 3 square, positioned so its top edge is level with the ground, and a Torch at the center - makes the border easy to spot at night. Corrupt and hallowed grass should be unable to jump this barrier. Be careful to eliminate or shield any stretches of Stone or Sand Blocks that might become tainted. Stopping tainted grass will be useless if it just spreads to your home underground anyway. -- TechpriestMagos 00:40, 22 December 2011 (UTC)

There's an even simpler version, I think. Dig a pit 7 blocks across and 4 blocks deep. Then dig the 3 lowest blocks out of each wall, so that there's a single block overhanging the resulting nook. Zombies will walk under the block and try to jump out, getting nowhere. (Unpretty picture below.) Add dart traps and pressure plates as desired.

Too much coffee? ;) Yeah, I use pit traps on the side approaches to my base too, looks pretty much like what you showed. Too bad enemies despawn when you leave an area, I must've collected hundreds of the buggers in my pits. - Spinfx 02:04, 22 December 2011 (UTC)

The section for Outposts needs better maintenance. For instance, the section for Snow Biomes is inaccurate and outdated, with the only update claiming that snow turns purple when the biome is corrupted- this is simplistic and blatantly false, considering it's the ice that turns purple- the snow itself is untouched by contaminating biomes. As well, it seems to discount the biome's value, ignoring valuable Ice Golem loot drops. If the corruption/contamination detail is excessive and should be learned from the biome's article directly, then perhaps it should be omitted entirely from the guide. --69.140.50.55 22:24, 19 November 2013 (UTC)

I notice that the room in the living tree with tables and chairs can let npcs move in. Worthy to be added? — Preceding unsigned comment added by Tylamimo (talk • contribs) at 13:11, 29 October 2014 (UTC)

Welp, it's mostly done except for pictures. The various biome sections were omitted as I felt they provided very little except for examples for the Outpost section (pictures would be great though). Similarly, I decline to elaborate on the defense section as there's already a whole other guide for it (plus another relevant one here, it would be redundant to go into detail). Really, all this article has to do is draw the player's attention to how NPC housing and oft-used features like storage and crafting can be grouped under one roof. I'm going to leave this alone for a while to see if anyone else has stuff to add. - Spinfx (talk) 06:13, 27 October 2015 (UTC)

Heya! I've been working on a page on outposts alone, because I think it's a subject worthy of its own page, and that is is clogging up this guide. I'm currently having some trouble creating the page, but when that's done I will move All info on outposts over to that page, and add a link to it on this one. Kwonunn (talk) 21:15, 5 November 2018 (UTC)

There isn't much info to warrant a new page for this one. I propose to merge with Guide:Bases as a subsection of the already existing Base defense section. This also has the advantage of removing some duplicated info that are scattered around the other guide pages. -- Murrayzero (talk) 13:54, 25 March 2019 (UTC)

I've merged the info from here into Guide:Bases. Do others feel the result is satisfying enough to mark this page for deletion and remove the merge notice on the other page? --MentalMouse42 (talk) 20:37, 5 September 2019 (UTC)

Nothing can stop a hostile player from damaging or destroying your base in vanilla Terraria if they have the means to do so. I believe players should be made aware of that fact. None of this guide’s advice will stop a determined griefer, and the sooner people learn this, the better, which is why I propose the deletion of this multiplayer section. It distracts people from reality. --Baconfry39 (talk) 02:58, 19 April 2019 (UTC)

I'm actually mixed on the removal of this section, this can potentially stop some specific griefers (newbies, for example, which don't know all of the game mechanics). But this section is a mess and i'd rather see it disappear than left here, unless someone could rework it. But even then, i'd move it to Guide:PvP. -- Murrayzero (talk) 08:48, 19 April 2019 (UTC)

Seeing as Guide:PvP now contains a proper section on traps and related mechanics, I believe it'll be alright for me to delete the corresponding information from this guide. I'll go ahead and do that unless there are any further objections. --Baconfry39 (talk) 23:00, 19 May 2019 (UTC)

Ah, right, I neglected to read the section header, my bad. I did find the part about using Announcement Boxes and sensors rather informative. Perhaps we should move the whole section to the PvP page? I can look at it some more tomorrow. – Ferretwings (talk) 02:41, 20 May 2019 (UTC)

Yeah, at the end of the Day no amount of Traps or Lizhahrd bricks will stop a player. This section should belong in Guide:PvP, and even then this would only be useful if the Server has some specific rules. Bame66 (talk) 11:18, 19 April 2019 (UTC)

The article is still marked as "needs cleanup". What issues are left that warrant further work? Or should it simply be marked as cleaned up? --MentalMouse42 (talk) 01:23, 5 March 2020 (UTC)