Minor nitpick about the dangers of stacked monsters to newbies: isn't it safer to stack them rather than face attacks from different directions, which imho is way more dangerous? - Spinfx 07:19, 15 July 2011 (UTC)

The point of that line was to warn against opening the door for what seems to be one zombie, because it could be several of them. Should I reword it? --Mr. Farenheit 15:57, 15 July 2011 (UTC)

I didn't think about that, but that probably would be a better way to describe its location. I'm not entirely sure whether there is anything between surface jungle and underground jungle on large maps. I'll have to check it on a mapping program. --Mr. Farenheit 16:35, 18 July 2011 (UTC)

Both of the large maps I generated don't have any normal layers in between jungle and underground jungle. It looks like a thick layer of mud is the only thing that separates jungle from underground jungle.--Mr. Farenheit 16:52, 18 July 2011 (UTC)

The first version of this guide is complete, but it needs polishing. What it needs now is more bulk. If you have any tips or tricks for certain areas, feel free to contribute. I'm not entirely satisfied with the layout, either, but I can't think of anything else to do with it. If you think you can come up with something better, feel free.

I'm going to be taking a less active role with this article now. I will check on it from time to time, but I'm done adding content to it. Please post on this talk page if you change something substantial, so that it can be discussed here if someone has a disagreement.--Mr. Farenheit 03:10, 22 July 2011 (UTC)

Which one do we want to call it? I chose to call it Dirt/Stone layer, but I was unaware that this wiki calls them Underground/Cavern layer. Do we know if they have official names? Personally, I think Dirt/Stone makes more sense, but if this wiki is going to officially call them Underground/Cavern, I think it should be changed to that.--Mr. Farenheit 05:19, 30 July 2011 (UTC)

Officially, yeah, they're the underground and cavern layers. When I was adding links I didn't change the names you used though. Go ahead and fix them. I usually only fix edits after a while in case the guy who put them wanted to reword it first. - Spinfx 08:43, 30 July 2011 (UTC)

Why isn't this guide in the sidebar?[edit source]

Excellent.. I've been more or less stumped on where to go. I'm on mostly gold items, but this bit about demonite and the progression of it didn't seem that obvious until finding and reading this page..

It made me wonder, why was this page so hard to find. It seems like a good guide, and all the main guides on the navbar just stop after giving a basic introduction.

I don't mean offense to anyone, but this guide seems to assume the player is someone who has never played a video game before. I was exploring the corruption, fighting and defeating the Eye and mining meteorite with 4 defense , only 100 health and a iron sword. It is annoying, because I want a walkthrough to guide me from this point but this is useless as it assumes the player has no idea how to fight. Surface exploring should be more focused on, especially finding Corruption and surface jungle. These are very rewarding for a new player and easy to traverse, just swing a broadsword constantly and place blocks covering chasms.

Terraria is a sandbox game. The game was designed to have multifarious approaches. You are not, however, guaranteed to have success with just any approach. The safest sequence is to follow the progression of equipment: Wood -> Copper -> Iron -> Silver -> Gold -> Special Tier. This guide is designed to ensure that anyone can complete the game by following it. If you want to sequence break, you are on your own.--Mr. Farenheit 18:42, 10 October 2011 (UTC)

This guide is great, but all those colours are simple terrible, in my opinion. Can't we just get rid of them? I think the abundance of illustrations make it quite clear what the biomes look like. --Toxik 18:56, 1 October 2011 (UTC)

As I mentioned above, I am not satisfied with the layout as it currently is. I just couldn't think of anything else to do with it. If you think you have a better way to do it, go ahead. --Mr. Farenheit 18:44, 10 October 2011 (UTC)

I think that this guide should have a major extension covering the Hardmode part of the game. Currently we have a few lines about it at the end of the guide which isn't really sticking in theme with the design of the rest of the guide. But, I have a question: Should we, due to the probably large size of the extension, create a new page for a Hardmode Walkthrough? I don't think we should, but I thought that we should discuss it before any major plans go underway. - Byronyello 23:42, 14 December 2011 (UTC)

I agree, what little information there is about hardmode on this page is neither extensive nor well-formatted. However, can a proper walkthrough be written for hardmode? The only linear part of it is killing the wall of flesh, then getting the new ores, then fighting the new bosses; there is no real order in which the new biomes should be visited IMO. As for the page split, it depends on how long the extension would be. I'd say keep it all together in a single page for ease of navigation at first, if the page gets too large because of it, we can always split it later. --190.55.92.154 23:57, 14 December 2011 (UTC)

The current Night biome recommendation of 8 life and iron equipment seems way overcautious to me. I agree it's dangerous at the starting equipment level (and as a total noob I ended up having to survive a couple of nights outdoors before I had the controls figured out well enough to complete a house). By the time I was up to copper armor and an iron sword, still at 5 hearts, I would routinely go out at night to collect fallen stars or because I didn't feel like waiting until morning to get back to mining, and had little difficulty dealing with the zombies and demon eyes I encountered. --71.239.4.247 04:11, 7 February 2012 (UTC)

I was wondering what the deal is with Piercing Weapons. It is listed as equipment to fight Eye of Cthulhu and Eater of Worlds but there is no page for it. Is that something to come in the future? I made some changes in the 'Eye of Cthulhu' paragraph and changed it there to "Ranged Weapons" since I don't see what kind of Piercing Weapon a player should have at that point.But I wanted to check back here to make sure...Cheers!--66.183.105.144 23:41, 11 October 2012 (UTC)

About the Duke Fishron section[edit source]

If someone doesn't flesh it out, I will. The Duke Fishron section needs to be formatted like all the other sections about bosses. Oh, and the links to pictures of the Crimson and Underground Crimson need to be fixed. There may be a few other things in this guide that need to be updated to 1.2.4.1.

While the normal Crimson indeed does not have an image, I do not see the problem with the Underground Crimson image. The link works and the image is displaying properly. Dynamic1285 (talk) 04:32, 15 December 2014 (UTC)

"Before entering hardmode, consider farming money" - but how much?[edit source]

In the section on what preparations to make for hardmode, one suggestion is "consider farming money", but it really should give a figure on what's a reasonable amount to aim for. Fizzixx (talk) 14:30, 19 July 2015 (UTC)

The guide advised to also clear all background walls along with foreground blocks when trying to quarantine corruption/crimson/hallow/etc. but from talking to others, and tests myself, I believe that this is not the case. This would add a lot of unnecessary work. Background walls can be corrupted, but don't spread corruption. My change to remove this from the guide was undone a while ago, but I just now got to actually getting proof myself so that there is no doubt. Going to now undo the undo :) 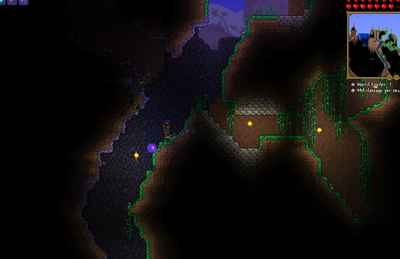 Are you sure you are in Hardmode? The corruption doesn't begin spreading via background walls until then. I had a world where I dug a 5 block wide trench around the corruption to preserve the Jungle, but it spread through the Background walls which I did not clear. It is true however that Background Walls do not count at all towards the current biome. – ReedemtheD3ad! (talk) 06:12, 2 February 2018 (UTC) 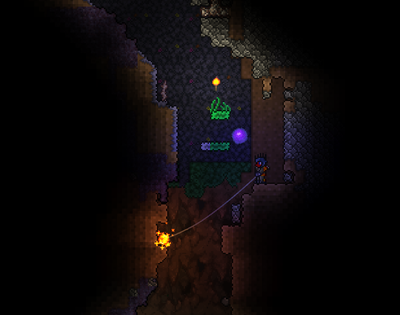 No need to apologize, I don't worry about the E-mails. They aren't a big deal to me. I just did my own test and did confirmed your findings. Perhaps the corruption in my previous world spread in another way? I apologize for undoing your edit when it was indeed correct. I'm not perfect. :) Thank you for taking the time to test it out and bring it to attention so that the correct information is on the wiki. – ReedemtheD3ad! (talk) 06:30, 2 February 2018 (UTC)