From Terraria Wiki
(Redirected from Housing)
Jump to: navigation, search 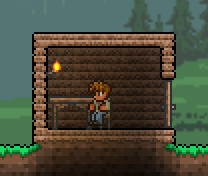 Certain naturally-generated structures can serve as Houses and may inadvertently attract NPCs if players have placed light sources within them. These can include Living Tree treasure rooms and Floating Island structures. NPCs can be moved from these to the player's structures using the Housing Menu.

A House is considered Corrupted based on its "Corruption rating," which is calculated using all tiles in a 45-block "radius" around the house. In order to be valid a House's Corruption rating must be less than 65.