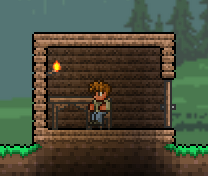 A basic House.
9 (exterior width) x 7 (exterior height)
See also Guide:Bases for Building an NPC Town (or Base)
See also Multi-Crafting Areas for examples on how to build a crafting room for your house.
See also Beds for setting a player's spawn point.

No Hobo • “Build a house suitable enough for your first town NPC, such as the guide, to move into.”
Successfully get an NPC to move into your first House.

All in the Family • “Every NPC has moved into your house”
All town NPCs are housed in your world.