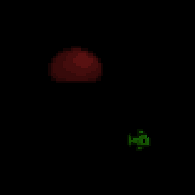 A Mother Slime (enemy) and a Goldfish (non-enemy) illuminated by the Hunter Potion buff.

The Hunter Potion is a buff potion which grants the Hunter buff when consumed. The buff shows the location of enemies and other beings on your screen by highlighting them and making them glow in a red (enemy) or green (non-enemy) light, if you would be unable to see them otherwise. This lasts for 5 minutes, but can be canceled at any time by right-clicking the icon (

). Although the enemies glow, they do not actually emit any light to the surrounding area.

These can be quite difficult to manually craft - you need a Shark Fin for each one; Shark Statues can make this a much easier process. Also, they can rarely be found in Pots and Chests.