This article is about the rare, resilient enemy from the Snow biome. For the post-Plantera boss, see Golem. For the enemy in Granite Caves, see Granite Golem.

The Ice Golem is a rare Hardmode enemy that spawns in the Snow biome during Blizzards, day or night. Ice Golems walk slowly and fire big ranged blue lasers that chill and occasionally freeze players. 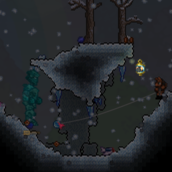 Since the Ice Golem is a very tall enemy, the player may want to use naturally found terrain features to stop and block its attacks, allowing easy grinding even in early Hardmode.