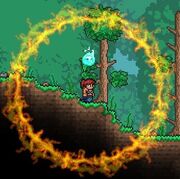 The ring of fire that appears when using the Inferno Potion. 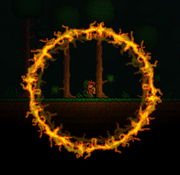 The ring of fire at night.

The Inferno Potion is a buff potion that grants the Inferno buff when consumed. It casts a ring of fire around the player that inflicts low damage and the On Fire! debuff on enemies on contact, as well as giving off light. Critters and other passive NPCs are unaffected. This lasts for 4 minutes, but can be canceled at any time by right-clicking the icon (

). It can be crafted or found in Shadow Chests in The Underworld.