From Terraria Wiki
Jump to: navigation, search
Third-Party Software
This page describes software not developed by Re-Logic. Software listed on this page has not been tested and is not endorsed by Terraria Wiki, Gamepedia, Fandom, Re-Logic, or their respective employees. Use it at your own risk. By downloading any third party software, you acknowledge that you cannot hold anyone responsible for any adverse effects to your devices, your game, or your online accounts.

An Inventory editor is a third-party program that allows you to add or remove items from your local character inventory, and in many cases, edit other character data.

Inventory editors are primarily designed for the

Desktop version of Terraria. Before you continue, it is advised to back up the character files.

A full inventory and character editor in a web-based app. Includes a user friendly UI. It is completely safe to use. Note that when you save a character file, you will have to rename it to [Name of choice].plr to use it in-game.

This inventory editor can also be used on

Mobile version devices since the 1.3.0.7 update. The character files should be located in:

You might want to use the editor in landscape so that interface elements are not chopped up.

A Windows based full inventory and character editor. Works as a standalone executable without any dependencies. Tested mostly on Terraria versions after Journey’s End but works on versions as far back as Terraria 1.3.

The source code is on the official github page 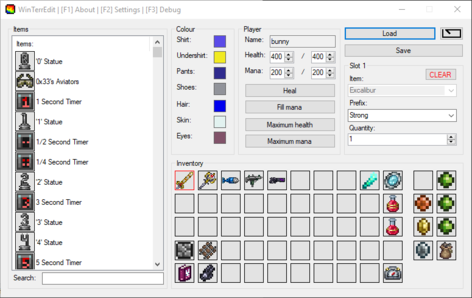 A full Windows-based inventory and character editor, designed to be compatible with Steam. The author, Shoot, appears to have abandoned this, so an alternate download link was made by a user at the Official Terraria Forums (see the link in the infobox).

The project is formally marked as abandoned on the Official Terraria Forums, however, the source code was released to the public and can be used to update the editor to work with newer editions of Terraria should someone wish to pick it up. 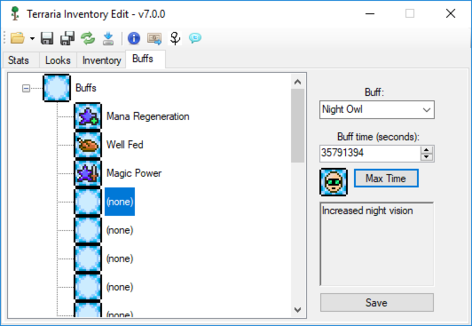