Sign In
Register
This page is part of the Turkish translation project. 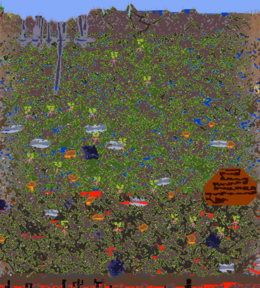 The Jungle is a surface biome composed primarily of Grass, Vines, Mud, Jungle Trees, and pools of Water, with a dark green background. Jungle Trees grow automatically on Jungle Grass found there, though traditional Acorns can also be planted. The Underground Jungle is found just below the Jungle, beginning at cavern depths.

Players can seed new Jungle areas by planting Jungle Grass Seeds in Mud blocks. Jungle Grass spreads much more slowly than ordinary grass. A Jungle biome will activate once a minimum of 80 Mud blocks are covered with Jungle Grass, or with 80 Lihzahrd bricks.

The Jungle becomes substantially harder during Hardmode. Additionally, there is a danger that the Jungle can be completely overtaken by the spread of Corruption/Crimson once Hardmode has been in effect for some time, making essential Jungle items more difficult to acquire, but defeating Plantera will slow down the spread of Corruption/Crimson and Hallow to 33% of their original speed in Hardmode. 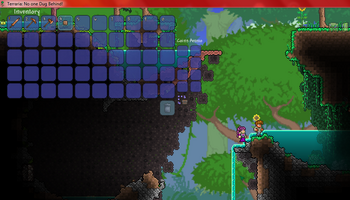 A player spawning in a jungle nearby a forest