The World is filled to the brim with the most outlandish kinds of fish!

Fishing is an activity accomplished by using a Fishing Pole at a body of liquid (water, honey, or lava) while having bait in the player's inventory. While near the body of liquid, clicking a point over the liquid will cast a line into the liquid. Click again when the bobber moves up and down to reel in the line and, hopefully, an item will come up with the line. The Angler NPC provides daily fishing quests and rewards their completion with an assortment of equipment, coins, potions, and vanity items.

Fishing provides an assortment of game resources: Crafting materials for Potions and food, a variety of very useful items such as the Reaver Shark, Rockfish, and Sawtooth Shark, which provide a Pickaxe, Hammer and Chainsaw to last until Hardmode, mobility improvements such as a Frog Leg or Balloon Pufferfish, and even a pet Zephyr Fish. Through Crates, fishing also provides an alternative source for ores, coins, many chest items (Sailfish Boots can replace Hermes or Flurry Boots) and some specialties such as the powerful Falcon Blade.

While fishing is not strictly necessary for game progression, some of the Angler's quest rewards (the Fish Finder components) are required to complete the Cell Phone.

For pre-Hardmode players, fishing can be a good way of getting money and equipment; by mid-Hardmode, it is less competitive with other money-making options, enemy drops, and advancing equipment. 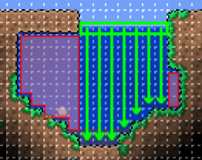 Surface width is determined first (green rectangle), then the depth below those tiles (arrows). Tiles falling outside the originally calculated surface width are not counted (red areas).

75 connected tiles of liquid are required (1,000 for oceans, 50 for honey) in order for fishing to work. The width of the top row of continuous liquid tiles (the row where the fishing bobber sits) determines the calculated pond width, and then the depth directly below those is counted. If the pond becomes wider at lower depths, that additional width is not counted. The player may successfully fish in a 1 tile-wide pond, as long as it's 75 tiles deep. The distance of the bobber to the shoreline does not matter.

It is not possible to fish when the player is submerged in liquid, even partially, and even within a completely disconnected body of water. Fishing can, however, be done while moving, flying, while grappled to blocks, while floating on water with the Slime Mount, or while standing on top of the water, eg. using Water Walking Boots. Fishing can be done in Lava, but will only work with the Hotline Fishing Hook.

Catching a quest fish for the Angler NPC requires fishing in the proper biome and height for the day's current quest, which can be determined by talking to the Angler. Quest fish cannot be caught if the player already has that particular quest fish in their inventory, or if the quest fish was already turned in that day. However, if you put the Quest fish in your safe/bank then you may catch another Quest Fish. You can then transfer the Quest Fish to a chest if you wish. The Angler gives out special rewards when a proper quest fish is turned in. You don't need to speak with him beforehand, nor have even encountered him, but the chances of finding the correct area to fish for a quest are much lower without speaking to him first.

Given the prerequisites for fishing are fulfilled, some factors influence the quality/rarity of the caught item. There is a variety of relevant equipment:

All the factors are combined into a total "fishing power" that determines the chances of higher-quality catches. Percentages in the tables below that influence fishing power are marked green or red.

Fishing Poles are used with bait for fishing. Some are craftable, while others are either sold by NPCs, found in Chests, or are awarded by the Angler.

These items can be caught at any time. Most can serve as crafting material for Food (Cooked Fish) and other Potions. Some can also craft other item types. Jellyfish can be used as bait. Most can be sold to NPCs.

These are fish items that can be caught only when their particular quest is active and serve no purpose other than acquiring quest rewards. Their catch chance is around 1:10. You can determine the day's quest by speaking to the Angler NPC. There are 39 distinctive variants of quest fish.

These items can be used directly without further crafting. Most are Tools or Weapons, many of which are best-in-class for large parts of the game. There are also a couple of Accessories offering jump boosts, an improvement on Healing Potions, a Pet, and in Hardmode a mount summon. The Angler's rewards fill out the set somewhat, with an early mount, a top-tier (Pre-Hardmode) Hook, and several items to help with fishing.

Crates are stackable grab-bag type items that each contain random loot including potions, bait, useful items, coins, metal bars, and even ores. They can be right-clicked from within the player's inventory, which will unload their contents. Rarer Crate types contain more valuable loot; however, only Wooden Crates contain ores. The biome crates can provide items otherwise found only in the matching biome chests, including Crimson Hearts/Shadow Orbs and the items found in Dungeon chests. (Not all biomes or special chests have matching crates.) Crates are one of the major sources for "alternate" metals and ores.

These items have no use or coin value. They can each be stacked up to 99 in a single inventory slot. You will only "catch" these if a lake is too small or if your Fishing Power is too low. When a lake is at least 300 tiles (200 for honey) in size or your total fishing power is at least 50 you will no longer catch junk.

Seaweed pet summon item, which is not found by fishing.

When fishing, there is a hidden catch counter which tracks your progress toward making a catch. The counter starts at 0 and increases over time. When it exceeds 660, there is a ((75 + fishing power) / 2) % chance that a fish will bite, capping out at 125 fishing power. The counter then resets to 0, regardless of whether or not there was a bite.

The catch counter increases every tick (there are 60 ticks per second) according to these factors:

For example, with a fishing power of 125, you can expect to catch a fish around once every 1.5 seconds:

A player can be eligible for catching fish from multiple biomes at once; however, certain biomes take priority over others. The priority order is: 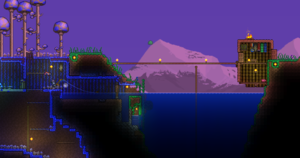 The player can "borrow" the Forest lake for the mushroom biome.

The height requirement (Sky/Surface/Underground/Cavern) is set by the height of the surface of the water, not by the position of the player. This can be taken advantage of by creating two adjacent pools of water on different layers. This allows the player to fish in either while standing at the same spot.

There are five height zones for fishing (see Layers):

The height requirement for Sky catches listed above is a rough estimate. On the

Desktop version of the game, the Fishing Surface must be at or above 386' for small worlds, 536' for medium worlds, and 704' for large worlds.

If you have the Golden Fishing Rod, Master Bait, full Angler set and Angler Earring equipped, with the buff of the Fishing Potion, and it's Raining, at 5:00 am, at New Moon, your fishing power will be 196, calculated like this:

The maximum possible Fishing Power is 282:

There are 6 different catch quality slots for catches, each with its own associated probability:

These values are rounded down. A fishing power of 85, for example, would have a 1 in 52 chance of an Extremely Rare catch.

When a new fish is generated, each different catch quality is checked for success, separately from one another. For example, the Uncommon, Rare, and Very Rare rolls might all succeed, while the Common and Extremely Rare rolls fail. Then, depending on which roll(s) succeed as well as factors such as height and biome, the game will generate a fish.

Each biome has a list of available biome-specific fish that can be caught there, based on the catch quality rolls and other factors. If no biome-specific fish is generated, the game will move on to checking subsequent, lower priority biomes. Many of the fish available in catch quality slots vary based on randomness, so succeeding at a catch quality roll in a specific biome does not guarantee that you will get a specific fish of that quality, or any fish of that quality at all. If no fish is selected for the slot, the game will proceed to check more common slots instead and move on to subsequent biomes if and only if none of those slots contain fish either.

When fishing in the water, a successful Extremely Rare roll will always check for a special catch first (Frog Leg, Balloon Pufferfish, and Zephyr Fish, in that order). If none of these checks succeed, the game will then check for biome-specific fish.

All quest fish occupy the Uncommon slot, except the Mirage Fish and Pixiefish, which are Rare.

There are only two Plentiful fish: Bass and Trout. If all other checks fail and you are fishing in the water, you will catch one of these by default: Trout if fishing in the Ocean, and Bass otherwise. If fishing in lava or honey, no fish will be generated and there will not be a bite.

When to stop fishing[edit | edit source]

Angler reward chances generally rise over time, but after the 150th Angler quest, most of the reward chances go back to their initial odds and stay there. Once a player has their Golden Bug Net, Golden Fishing Rod, Fish Finder, and Angler Tackle Bag (with perhaps a spare Angler Earring), it may be wise to leave off Angler quests until Hardmode, and hopefully avoid hitting the deadline before getting the Hardmode rewards. Fishing without the Angler can still be profitable, and stockpiling crates for Hardmode has its uses.

After Hardmode, there are only a couple more weapons and a mount to catch (Toxikarp or Bladetongue, Crystal Serpent, Scaly Truffle), and a few more useful Angler rewards: The Bottomless Water Bucket and Super Absorbant Sponge for water handling, and the Hotline Fishing Hook for fishing in lava. That last can provide the makings for Inferno potions, and a short-but-deadly spear (the Obsidian Swordfish). Once a player has all that, they're done with the Angler Quests. Fishing can still provide potion resupply, metals (especially the alternates), and money (the Scaly Truffle is a good target), but no new items after this point.