This article is about the light pet summon item. For the environment object, see Shadow Orb.

The Shadow Orb is a light pet item that summons a slow-moving sphere which follows the player around and emits dim, purple light. The orb can move through solid objects and liquids unhindered, but moves very slowly, causing it to fall behind when the player is moving quickly. If it falls far enough behind, it will teleport to the player's location. It has a 1/5 (20%) chance of dropping from destroyed Shadow Orbs, but it can also be acquired by looting Corrupt Crates, which are obtained by fishing in the Corruption. 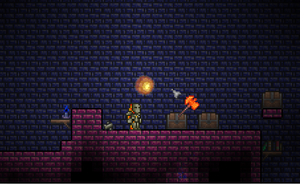