Trees are the largest plants in Terraria, appearing mostly at the surface and often in clusters with similar height. Trees can be chopped down with an axe, destroyed with the use of explosives, or by pouring lava on their bases. Destroying or chopping down a tree will yield many units of their respective wood, an essential crafting material, and have a chance of dropping one or more Acorns that can be planted to grow more trees. Larger trees will yield more of these two materials when removed; one unit of wood will drop for each block of tree (including branches), and one acorn may drop for each leaf patch.

With the exception of Living Trees (discussed further below), trees are background objects that do not affect player or enemy movement. However, torches can be placed on any type of tree, whether it is the Living variant or not.

Trees cannot be climbed or scaled with items such as a grappling hook (other than the Squirrel Hook), or have blocks of dirt or other walk-on surfaces be placed to overlap their limbs (it is possible in some versions however, Mobile excluded, to attach platforms to the trunk of a tree). However, blocks and platforms can be placed in front of the leaves at the top of the tree (or the caps of Giant Glowing Mushrooms) and furniture can be placed there, although it will be obscured by the leaves. Objects that give off light (E.g. campfires, torches, etc.) will also be obscured by the leaves, but will still emit light as normal. It can sometimes be necessary to chop down a tree that is next to a cavern entrance or cliff in the early game in order to replace it with a ladder of blocks that will allow scaling of the steep surface; this becomes unnecessary when the player obtains a grappling hook, Climbing Claws or other items that allow improved jumping or flying.

Trees must be removed when building houses, as they may obstruct building it. When digging upward to the surface, trees may obstruct your digging, so they need to be destroyed in that instance, too. 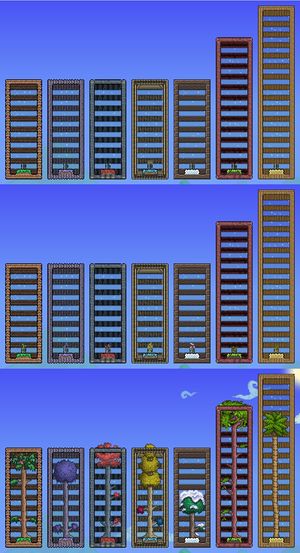 Planting an acorn on certain blocks will create a Sapling that can eventually grow into a tree. An acorn can only be planted on grass, Corrupt grass, Crimson grass, Hallowed grass, Jungle grass, Snow, or Sand. (Not mushroom grass, but see "self-spawning" below). The tree will be of a type according to the block it was planted on, with random size and shape appropriate to their type. Saplings can be destroyed with a Pickaxe, but will not drop the Acorn they were planted from. Saplings can only grow under the following conditions:

Giant Glowing Mushrooms have similar space requirements to trees, but they cannot be planted; instead, they will "self-spawn", randomly appearing full-grown on Mushroom grass. Cacti need much less space, but can likewise self-spawn on any sand variant. "Infected" sand will spawn cacti which appear different according to sand type, but are otherwise identical. Jungle trees can also similarly self-spawn on Jungle grass (if there is space), but can also be planted with acorns.

Shaking occurs when a player hits the stem or branches of a tree with an axe or chainsaw, but does not fully cut it down. In order for a tree to be shaken, it must both have a "leafy" top as well as not have any blocks in a two block radius from the top. In addition to this, players can shake a maximum of 200 trees a day. After this shaking will not occur.

They have a 1/20 (5%) chance to replace a forest tree during world generation.

Jungle trees grow on Jungle grass, in two ways: Acorns can be planted as with most other trees, but jungle trees can also "self-spawn", like Cacti and Giant Glowing Mushrooms. Either way, the prospective tree needs the usual horizontal space, and a 24 blocks headroom to grow. This makes self-spawning fairly rare, because the larger jungle plants tend to appear first and block tree growth. Worldgen and self-spawning can create jungle trees under water, but acorns cannot be planted under water.

Gem trees naturally generate in the Cavern layer, and can also be grown by planting a Gemcorn on stone blocks in the Underground, Cavern, or Underworld layers. There are seven types corresponding to the seven types of gems.

Gem trees can be used for farming gems in the early game, allowing earlier acquisition of a gem staff, robe, and/or hook, making them especially useful for early game magic players.

Gem Squirrels and Gem Bunnies may spawn near any planted Gem Trees.

Cactus generate with the world and self-spawn over time on various types of sand. They will appear differently depending on the type of sand beneath them (plain/crimson/corrupt/hallowed) but in all cases they will yield cactus blocks when harvested with an axe. They cannot be planted (and do not drop acorns), but will spawn naturally given flat sand and sufficient room. They need much less space than other tree types. However they differ from trees because they grow stepwise, block by block, instead of instantly spawning full-grown. Once full-grown, they can also form a Pink Prickly Pear block on top.

Living Trees are huge tree shaped structures made of solid blocks that can be found in the forest biome and are created during world creation. (on Small worlds they can extend into the range of Harpies).

can be found in large Underground Jungle cavities.

Unlike the other plants mentioned here, both sorts of Living Tree are foreground objects which block passage. They cannot be planted or grow during the game, but they can be built as a structure by the player, with appropriate wands.

Timber!! • "Chop down your first tree."
Chop down a tree.