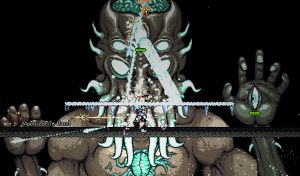 The Moon Lord in battle firing his Phantasmal Deathray which is colliding with solid blocks directly above the targeted player. In 1.4, the deathray passes through blocks instead, and will damage the player.

For more elaborate strategies on defeating the Moon Lord and learning about his abilities, including Weapon and Arena recommendations, see Guide:Moon Lord strategies.

The Phantasmal Deathray is a high damage laser beam fired by Terraria's final boss, the Moon Lord. The True Eyes of Cthulhu fire a miniature version whose reach is much shorter and whose damage is much lower. The Deathray deals 150 / 300 damage, which can easily cripple the player, and in master mode it only takes one hit to kill the player.

The Deathray emerges from the central eye of the Moon Lord as a thick line that reaches beyond the edges of the targeted player's screen, and will sweep the area, covering most of the screen in its path. It is possible to avoid the deathray by staying close to the Moon Lord's head and moving around the central eye as it fires the ray, teleporting using the Rod of Discord. The Mechanical Cart also travels fast enough that it can keep the Moon Lord just out of reach, along with its Deathray.

In 1.3.5 or earlier, the ray doesn't go through solid blocks. In those versions, it was a useful strategy to fight the moon lord in an arena with solid blocks between the player and the Moon Lord's head.

The Moon Lord uses this ability every time it opens the eye in his forehead, though it takes time to charge and fire the deathray and it also takes time for the Moon Lord to close its eye after he's done firing it.