Plantera is a Hardmode boss that can be fought in the Underground Jungle after all three mechanical bosses (The Destroyer, Skeletron Prime, and The Twins) have been defeated. Plantera drops a Temple Key upon defeat, allowing access to the Jungle Temple.

While Plantera is alive, her exclusive music Plantera will play.

After all three mechanical bosses have been defeated, Plantera's Bulbs will randomly spawn in the Underground Jungle (indicated by the status message "The jungle grows restless..."). Destroying one of these bulbs will immediately cause Plantera to spawn. She can spawn a fair distance off-screen. The bulbs can only break if the blocks under it are broken, or it is mined with a pickaxe. 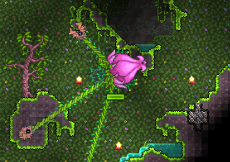 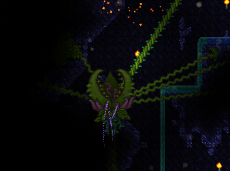 Plantera creeps after the player, firing pink Seeds with increasing speed as she takes more damage. When below 80% health (24000 / 33600), she begins dispensing bouncing Thorn Balls and firing green Poison Seeds.

Although Plantera attacks at range, contact can still occur if she gets too close, causing 50 / 114 / 172 damage.

Once Plantera is brought down to half of her maximum health, she changes to her second form: her pink petals fall away to reveal a thorn-filled mouth. In this form, Plantera moves more aggressively and attempts to make contact. She also sprouts additional mouths that are attached via vines (called "Plantera's Tentacles") to her body. Once all of the tentacles have been killed, they will never regrow, making Plantera much easier to fight.

Plantera will also release floating pink spore projectiles that drift towards the player, similar to the spores released by the Giant Fungi Bulb.

In Expert mode, there are a few significant differences in Plantera's attacks, aside from the default increased health and damage.

Plantera's Seeds, that originally did not travel through blocks, now can and deal increased damage. They also have limited homing capabilities.

The Thorn Balls are also more common and home in on the player.

Plantera's Tentacles, originally only attached to the body, now are attached to the Hooks and have increased in number (considering there are 3 more for each hook, there appear to be 9 extra tentacles). They also have more health than usual (including the default increased health). Plantera's body also does more damage and is faster than normal.

Plantera always drops a Temple Key, which grants access to the Jungle Temple and the Golem boss. In the

3DS version, Temple Keys can also be combined with Biome Key Molds to craft Biome Keys; but in the

A status message saying "Screams are echoing from the dungeon..." will appear, signaling that new, more difficult enemy types will begin spawning in the Dungeon (see details). These drop powerful new weapons, accessories, and other items. Dungeon Spirits will begin to appear when Dungeon enemies with more than 100 health are slain, which drop Ectoplasm, a new crafting material that offers access to the Pumpkin Moon and Frost Moon events, as well as Spectre Bars

The Great Southern Plantkill • "Defeat Plantera, the overgrown monstrosity of the jungle's depths."
Defeat Plantera for the first time.