Cattails are plants that grow upwards from blocks underwater. They are background objects and can be destroyed with most weapons or tools, but only Glowing Mushroom cattails yield drops. They can grow up to 1 tile above the surface of the water. Destroying a tile of the cattail will destroy all tiles of the cattail above it and destroying the base or block it's attached to will completely destroy the cattail. 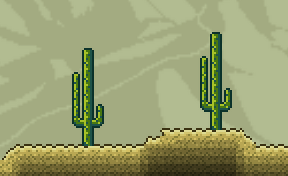 Destroying vegetation in a Surface or Underground Jungle Biome has a chance to spawn various Bait Critters that can be collected with the Bug Net (Worm, Grasshopper, Grubby, Sluggy, Buggy).

Jungle vegetation are plants that grow naturally on Mud Blocks in the Jungle and Underground Jungle biomes.

Oasis vegetation are plants that grow naturally on Sand Blocks in the Oasis biome. 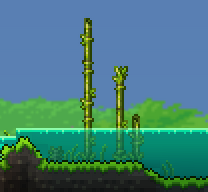 Bamboo grows naturally on Jungle grass that is submerged under water 2-5 blocks deep. It grows in straight columns at a very slow rate. Bamboo can be cut down with a pickaxe and can be used to make furniture or Large Bamboo.

Seaweeds are plants that naturally grow on Sand Blocks submerged under water at the Underground layer, most notably in Ocean Caves. 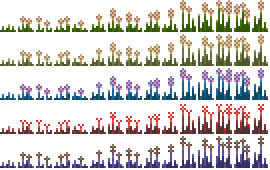 Sea Oats are plants that naturally grow on Sand Blocks in the Oasis and Ocean biomes.

Thorny bushes grow naturally in the Corruption, Crimson and Underground Jungle, and will damage the player on contact. There are currently three types of thorny bushes: Brown bushes from the Underground Jungle deal 25 damage; purple and red bushes from the Corruption and Crimson, respectively, deal 10 damage each. Thorny bushes are destroyed after contact with a weapon,tool or the player. Invisible projectiles (Medusa Head, Life Drain etc.) don't destroy thorny bushes. Thorny bushes can grow six tiles in all directions. All NPCs and enemies are immune to them. They cannot be obtained as an item. The purple and red variants spread the Corruption/Crimson; the brown variant, however, does not spread Jungle grass. The growth of thorny bushes is blocked by solid objects and various other scenery. 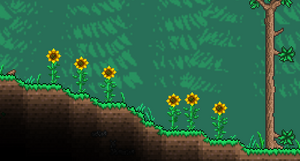 Life Fruits are consumables that permanently increase the player's maximum health by 5, up to a total of 500 (20 used). They are found in the Underground Jungle after defeating at least one mechanical boss (

Plantera's Bulb is a pink plant in the Underground Jungle that will begin to appear after all 3 mechanical bosses (1 will suffice on the 3DS version) and the Wall of Flesh have been defeated in a particular world. It will summon Plantera when mined with a pickaxe/drill, broken by explosives, hit by a Clentaminator with Dark Blue Solution, or if a mud block under it is hammered or converted to another block. Though it cannot be broken by other weapons or projectiles, caution should still be taken if these conditions are met to prevent any unwanted boss fights. One bulb will spawn about every six minutes (roughly half of an in-game day.)

Players using this page to look for plant-themed decorations should also note that there are several walls, blocks, and furniture items with plant-based themes for decorative use.

Potted Trees are available in Hardmode. They are sold by the Dryad, with different varities available during different moon phases.

Potted Lava Plants may also be obtained by lava-based fishing.

The Christmas Tree is another furniture/decorative plant.