Weapons and their projectiles will travel through Platforms. Any hook will grab them, but grappling while attached to the platform will only re-grapple it. Liquids flow through platforms, and lava will destroy all platforms upon contact, with the exception of Obsidian Platforms. Sand will be supported by platforms. 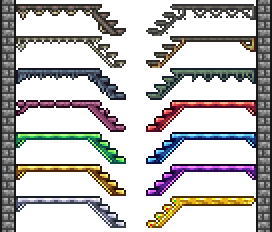