From Terraria Wiki
Jump to: navigation, search
Platforms
Statistics
This article is about the furniture item. For systems that can run Terraria, see Game platform.

Platforms are a special type of block that can be walked on, but also allow movement through the space they occupy. The player normally stands and walks on platforms as if they were ordinary blocks, and they can move down through a platform by pressing the ▼ Down key while standing on one. Players can also walk or jump horizontally through the space occupied by platforms, only treating the platform as "solid" when landing on them from above.

Stone Platforms. Gravity-affected blocks like Sand will be supported by platforms.

Because of the high mobility provided by platforms, they can be used in a variety of ways: as a bridge across gaps that players can descend through without destroying, for roof access that keeps some enemies from getting through, or to create a fighting area above most enemies that players can fire down through while keeping out of reach. Also, since Piggy Banks, Chests, crafting stations and most other furniture can be placed on them like on ordinary blocks (exceptions include gems and Crystal Shards), they can be used as a shelving to pack furniture into a confined space without restricting player movement.

A platform has four distinct positions, which can be cycled through by hitting it with a hammer, similarly to an ordinary block:

A fourth hammer blow will cycle the platform back to its default position. Only one platform can occupy a single block tile, so there cannot be top and bottom platforms in the same tile.

Stairs can face either direction, regardless of what side of a block they are on. Walking up stairs in the direction they face will raise the player as expected, but walking towards stairs facing away from the player will not have any effect. As with normal platforms, pressing ▼ Down will cause stairs to be ignored. Nothing can be placed on stairs. Smart Cursor can be used to place stairs without having to hammer the platforms into the correct state.

Placed craftable platforms. Click/tap the image to view a summary of each row.

version, platforms are crafted from only one block of their respective type. 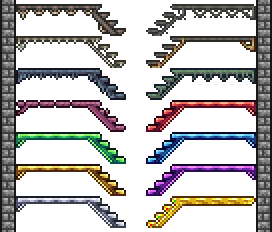 Placed noncraftable platforms. Click/tap the image to view a summary of each row.

An NPC-proof door. The stairs (and the platforms below) act as a divider between each "house cell". Everything can go through this entryway but NPCs see it as a solid wall so they turn around.

A stair elevator made of Frozen Platforms. Walk into it holding ▲ Up and ↷ Jump to use it.