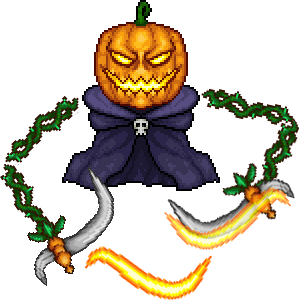 Master
Statistics
Sounds
Not to be confused with a Pumpkin.

Pumpking is a Hardmode, post-Plantera mini-boss that spawns during the Pumpkin Moon event. It is the event's most difficult enemy, being one of the two whose main body consistently travels through blocks (the other being the Poltergeist) and is also immune to most debuffs. Up to seven of them (more in Multiplayer) can attack simultaneously during the event's final wave (wave 15).

Pumpking has two arms, each possessing a large scythe that periodically fires erratic projectiles. The hands otherwise act much like Skeletron's hands, swiping at the player to inflict melee damage. But unlike Skeletron, Pumpking's hands cannot take damage.

Like Mourning Wood, the later the wave Pumpking is killed in, the more likely it is to drop items. Pumpkings defeated during Wave 15 are guaranteed to produce one Pumpking Trophy along with one of its other items. Defeating the Pumpking will add 150 points during the Pumpkin Moon event, giving the most number of points for any enemy during the event.

Pumpking repeatedly switches between three different attack patterns at random. Its current attack mode is indicated by its facial expression. When transitioning to its next mode, its head rotates to reveal a different expression.