The Reindeer Bells are a Hardmode, post-Plantera mount summon item. It summons the rideable Rudolph character which greatly speeds a player's movement and adds the ability to fly. It has a chance of between 0.56% and 0.83% to be dropped by the Ice Queen during or after wave 15 of the Frost Moon event.

Similar to the Hoverboard, flight height can be constrained by holding the ▼ Down key in addition to the ↷ Jump key, so movement will be horizontal only. 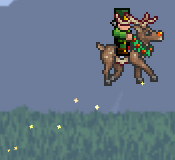 A player using the mount.

The Reindeer Bells being used.

The Cavalry • “Equip a mount.”
Equip your first Mount.